by Audrey M
in Health, News
0 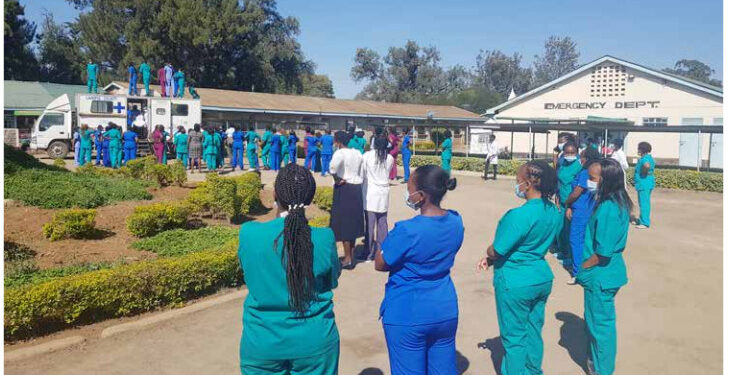 981
SHARES
2.4k
VIEWS
Share on FacebookShare on TwitterShare on WhatsApp

Two families in Nanyuki, Laikipia County, are seeking justice for their kins who are alleged to have died while awaiting treatment at the Nanyuki Teaching and Referral Hospital.

The family of 58-year-old Halima Hassan is demanding answers as to why they had to lose their mother while the hospital staff was holding a birthday party for a colleague.

It is alleged that the family took Halima to hospital with a problem associated with high blood pressure but failed to receive the required attention since the nurses were organizing a surprise birthday party at the laboratory.

According to Sophia Hassan, the daughter of the deceased, a confrontation emerged between her and the staff at the emergency department after asking why it was taking too long for her mother to be attended to.

The grieving daughter claims that her mother died on her hands while seated on the grass, waiting for the nurses to complete their party.

Sophia said the nurses asked them to wait for 5 minutes to be attended to, only for it to turn into an over 30-minute wait leading to the death of her mother.

The family is now accusing the hospital administration of negligence in handling the matter, seeking answers as to why Halima had to suffer a premature death.

The family of Jane Njoki in Ichuga is no different. The 24-year-old’s mother, Beatrice Nyawira, has begun burial arrangements after Njoki, her second-born child, died due to excessive bleeding after giving birth.

Her husband, Ibrahim Mohammed, claims that they went to donate blood to save her life and even bought medicines from outside the hospital, but she was not attended to since the nurses said they do not work on holidays.

After hours of waiting, Mohammed says, they came to learn that operations in the hospital were running slowly due to a surprise birthday party that was being conducted at the laboratory.

Laikipia County Governor Ndiritu Muriithi told Citizen Digital that investigations are presently underway, and the matter will be attended to according to the Employment and Integrity Act of the Kenya Medical Practitioners, Pharmacists and Dentists Union (KMPDU).

He however asked the residents to focus on the benefits that they get from the hospital, and not criticize it because of a few negative incidents.

Alchemist Bar In Nairobi On The Spot Yet Again