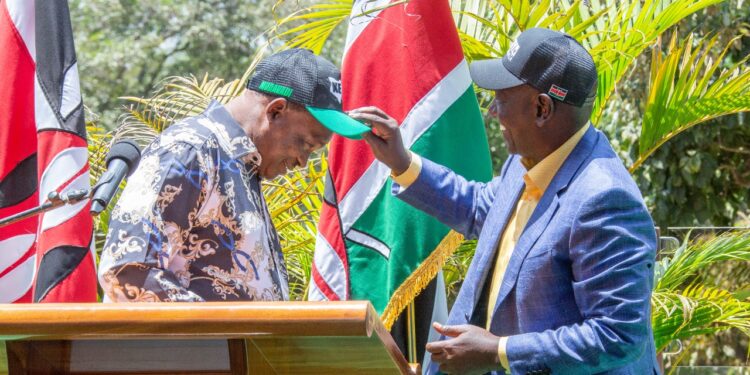 Three Democratic Party (DP) members have written to the Office of the Registrar of Political Parties challenging the move by their leader to join forces with the Kenya Kwanza Alliance.

The trio – Wambugu Nyamu, Daniel Munene and Kingori Choto say the move by Speaker Justin Muturi to join Deputy President William Ruto’s Kenya Kwanza alliance is against a resolution reached at the National Delegates Convention (NDC) which was held on February 20, 2022 where it was “resolved that the party will not to join any coalition before the General Election to be held on August 9, 2022”.

“This decision is in the public domain as the NDC was televised live to the Nation on that day,” they said in the letter.

Consequently, they want the parties Registrar Ann Nderitu to “reject the coalition document purporting to join the Party to KenyKwanza Alliance”.

Muturi on Saturday teamed up with the Ruto-led alliance ending months of speculation about his association with the alliance but the three members of the DP Party have accused Muturi of looking out for his own selfish interest.

“The NDC further resolved that in the event the Party decides to join any coalition, this will only be after the General Election (post-election coalition),” they said.

Once considered to be an ally of President Uhuru Kenyatta, Speaker Muturi is rumored to be angling for the position of deputy President in the August polls.

The trio has committed to present themselves at the Office of the Registrar of Political Parties to table more evidence on the resolutions which were made and sanctioned by the party.

After signing the agreement, Muturi noted that he had been given blessing to team up with like-minded parties with a view of forming the next government. The former Siakago MP cited the NDC.

“I promised during the Democratic Party National Delegates Convention that as instructed, I would consult people of goodwill, like-minded parties and party leaders. My party has given me that backing,” he said.

In welcoming Muturi to the alliance, Ruto downplayed what he described as “threats and intimidation” from the “system.”

“We are going to shame the deep state and dark forces,” he said, “To our competitors please try and cobble together a plan and an agenda to sell to the people.”

“Kenyans should internalize that the Head of the Legislative has joined the Kenya Kwanza team,” he said.