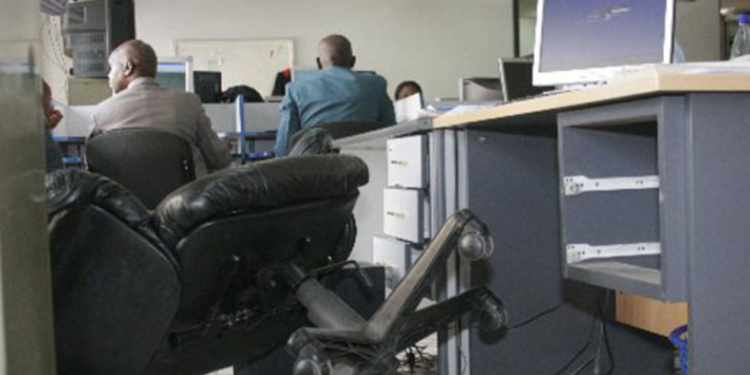 Kenya Times Newspaper employees shortly after auctioneers stormed and carried away some furniture over Sh7 million debt last year. On Monday, a Nairobi court will rule on a case filed by former employees seeking their terminal dues | File Photo

The curtain finally came down on the Kenya Times early this month after 27 years of operation. And on Monday, a Nairobi court will rule on a case filed by former employees seeking their terminal dues.

The Kenya Times was the first full color newspaper in the country as it had the most modern printing press in the region.

In its heyday, KT as it was famously known, was a feared publication during the weak-kneed Sixth Parliament that owed its allegiance to retired President Moi and the then ruling party Kanu.

Few politicians dared to be covered in bad light by the then ruling party’s mouthpiece as it could herald one’s demise politically.

The newspaper was well known for carrying out a roll call in Parliament under its then erstwhile editor-in-chief Philip Ochieng. So feared was the roll call that MPs would stream back to Parliament before it adjourned for the day just to be included on the list to be published the next day.

First published on April 5, 1983, the Kenya Times was fully owned by Kanu. It was previously known as Nairobi Times when the title was bought from publisher Hillary Ng’weno.

Five years after its launch, media mogul Robert Maxwell bought 45 per cent stake in the newspaper.

The acquisition of shares by the Maxwell group and the launch of a full color newspaper saw Kenya Times’ sales rise to become the second most popular newspaper in the country after the Nation.

But fortunes for the newspaper changed dramatically after the first multiparty elections in Kenya in 1992 when Kanu’s supremacy started to wane.

Kenya’s history of election violence is threatening to repeat itself

Sudi Proposes To Debate Raila On Behalf of Ruto