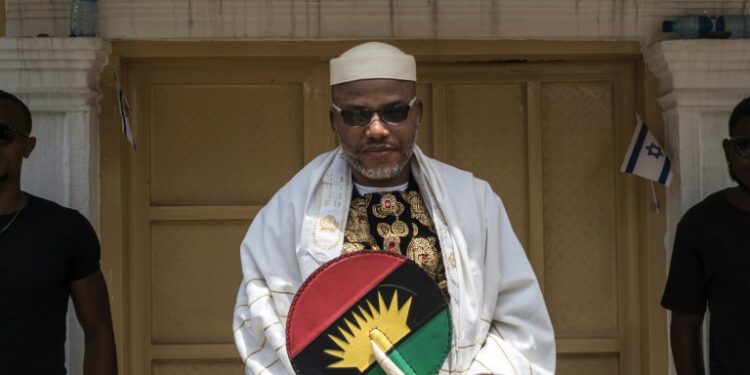 Biafran separatist leader Nnamdi Kanu, holding the flag of the breakaway republic at commemorations in 2017 to mark the 50th anniversary of the outbreak of the civil war | AFP

A Nigerian separatist leader, Nnamdi Kanu, whose whereabouts were unknown, has been arrested to face trial, the country’s justice minister said Tuesday.

“Nnamdi Kanu has been intercepted… He has been brought back to Nigeria, in order to continue facing trial after disappearing,” Abubakar Malami, who is also attorney general, said in a statement.

Kanu was arrested in late 2015 after calling for a separate state for Biafra, in southeast Nigeria.

His detention sparked mass protests and clashes with security services.

The former London estate agent disappeared in 2017 after being released on bail, only to re-emerge in Israel and then in Britain.

The head of the outlawed Indigenous People of Biafra (IPOB) movement was detained again on Sunday, Malami added, without giving details on the location of his arrest.

He is facing trial for charges that include “terrorism, treasonable felony, managing an unlawful society, publication of defamatory matter, illegal possession of firearms and improper importation of goods, among others,” the statement said.

Southeast Nigeria has seen a recent surge in attacks, with around 130 police and security officials killed and around 20 police stations attacked this year, according to local media tallies.

Election offices have also been attacked.

IPOB, which agitates for a separate Igbo state, has denied being behind the violence, accusing the government of a smear campaign.

Calls for a separate state of Biafra are a sensitive subject in Nigeria, after a unilateral declaration of independence in 1967 sparked a brutal 30-month civil war.

More than one million people died, most of them Igbos, from the effects of conflict and disease.

Government Shuts Down Isiolo Gold Mine For Environmental Audit

Cabinet to Forego One Month’s Salary in Fight Against Hunger