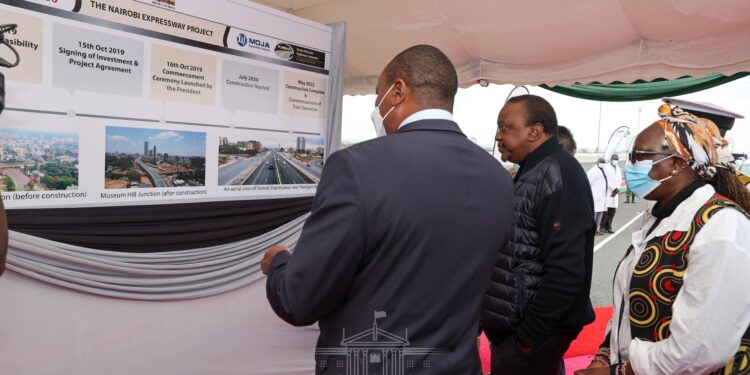 Speaking after launching the mega projects, President Kenyatta emphasized that infrastructural development is key to opening up opportunities for Kenyans.

He expressed optimism that the Nairobi expressway and the bypass road will significantly address the nightmare of traffic gridlocks in Nairobi estimated to cost the nation over Kshs 5 billion annually in lost productivity time and wasted fuel.

“Since we opened the road for public trials in April, it now takes between 15 and 24 minutes to drive from Mlolongo in Machakos County to Rironi in Kiambu County. Before the expressway, that journey would take at least three hours which is the equivalent of flying to Addis Ababa and back,” President Kenyatta said.

The Head of State noted that in the short time the Nairobi Expressway has been open for trials, it has already proved its worth by ushering in an era of reduced travel time, increased mobility, reduced congestion and enhanced productivity.

In this regard, President Kenyatta said the expressway has created a better business environment that will lead to more opportunities for the country’s tourism, conferencing and hospitality sector that employs over 3 million Kenyans directly and another 6 million indirectly.

The President added that the Nairobi expressway also guarantees better emergency response for all those in need of critical care and better commuter movement as well as relief for the main transport artery that serves Jomo Kenyatta International Airport.

“This singular project secures Nairobi’s status as the region’s capital and economic nerve centre and, therefore, strengthening Kenya’s position as Eastern and Central Africa’s commercial and diplomatic hub,” he said.

He said his administration has invested extensively in infrastructure projects in line with the dream of the country’s liberation heroes who envisioned a nation where the Government implements transformative development programmes and policies that boldly lay the foundation for achieving a better and prosperous Kenya for all.

“As correctly identified in our Vision 2030 blueprint, a solid and functional infrastructure is a key enabler to the realization of that national dream,” President Kenyatta said.

The construction of the Nairobi Expressway complements the expansion of the James Gichuru Junction – Rironi Road and the Athi River – Machakos turnoff Road which are both adjacent to the expressway.

President Kenyatta said other initiatives that have reduced congestion in the capital city include the construction of the 97km-long ring of four bypasses around Nairobi, the expansion of Ngong Road and Outer-ring Road as well as the construction of several new link roads.

He observed that the Nairobi Expressway also ushers in a new model of executing public projects through the Public Private Partnership (PPP) model where a project is not financed through debt or Government funds.

“As the first PPP road project in Kenya, the Nairobi Expressway marks the Government’s pivot towards leveraging private capital to bridge our infrastructural deficit,” the President said.

The China Road and Bridge Corporation company, which designed, financed and built the expressway, will maintain and operate it during the project’s concession period where it will recoup its investment by collecting toll charges from motorists using the expressway.

President Kenyatta said the investor will transfer the road to the Government at the end of the concession period.

“The contractor will also revamp the parts of Mombasa Road, Uhuru Highway and Waiyaki Way that are adjacent to the expressway at no additional cost to taxpayers,” President Kenyatta said.

On the Eastern Bypass, President Kenyatta said the road plays a major role in directing traffic away from Nairobi’s Central Business District, reducing travel times in and around the city.

The President also pointed out that his administration has built more than 11,500 kms of new tarmac roads which have increased Kenya’s paved roads network by more than 85% during his term in office.

“As a result of accelerated road development and maintenance, more than 70% of Kenyans can now access an all-weather road network within a radius of 2km of their homes,” the President said.

President Kenyatta reiterated that the notable infrastructural development was achieved because of the peace and security that the country enjoys.

In this connection, the President cautioned Kenyans to be wary of political leaders peddling anger, hatred and lies instead of voicing their policies on what they will do for the electorate.

He urged Kenyans to avoid anything that may jeopardise peace and security in order for the country to remain on the development trajectory.

“If they didn’t have confidence, this project would not have been possible. You (President Kenyatta) paid personal attention to the construction of this particular project. It was completed in a record 18 months ahead of the projected 36 months,” said CS Macharia.

Noting that the brotherly relationship between the two countries has reached a new height unmatched in history, the Chinese Ambassador said his country appreciates Kenya’s invaluable support whenever China’s interests are concerned.

Schools To Take Two Week Break Ahead Of Elections

Bayern Munich expect losses of 150 million euros due to Covid