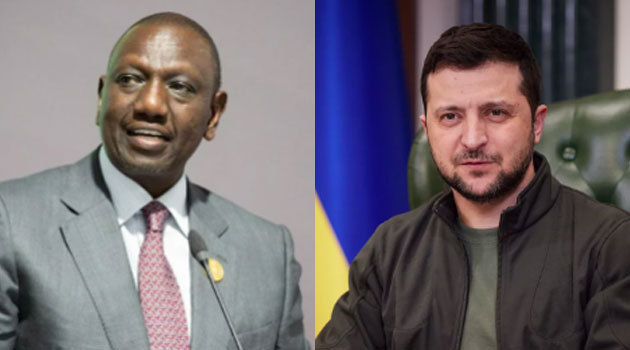 President William Ruto and his Ukrainian counterpart Volodymyr Zelenskyy have promised to enhance future cooperation between the two states.

Taking to his Twitter handle on Friday, January 13, Zelenskyy revealed that he and Ruto had a fruitful conversation where the two Heads of State discussed matters of food security and the creation of grain hubs in Africa.

“Had a fruitful conversation with President @WilliamsRuto. Thanked for constructive cooperation in the UN, and for support as a Security Council member. Discussed #GrainfromUkraine initiative, food security and creation of grain hubs in Africa. Agreed to enhance cooperation!” Zelenskyy tweeted.

In response, Ruto termed the conversation he had with Zelenskyy as an important conversation that he looks forward to picking up in future.

“An important discussion that I look forward to picking up again Mr President. Kenya is definitely open to increased partnership between our two nations, especially in the areas of food security and setting up grain hubs,” Ruto tweeted in response.

CS Ndung’u who was speaking during the public hearing of the budget-making process said Kenya’s financial crisis is rising to unimaginable levels as the cost-of-living soars with inflation hitting 9.1 per cent in December as the effects of the Russia-Ukraine war continue to batter the economy.

The Treasury boss also called for austerity measures in the ministries including the suspension of any new development projects.

“From all the things we have analyzed… 2023 is not looking good, there are clear signals that it is going to be a tough year,” the CS said.

Prices of commodities and particularly household goods continue to be the government’s headache with President William Ruto insisting that subsidy programs that existed before, plunged the country into a financial muddle.

The exchequer is now turning its energy to tax collection to boost the revenue figures.