Presidential Candidates Have Until April 28 To Name Running Mates – IEBC 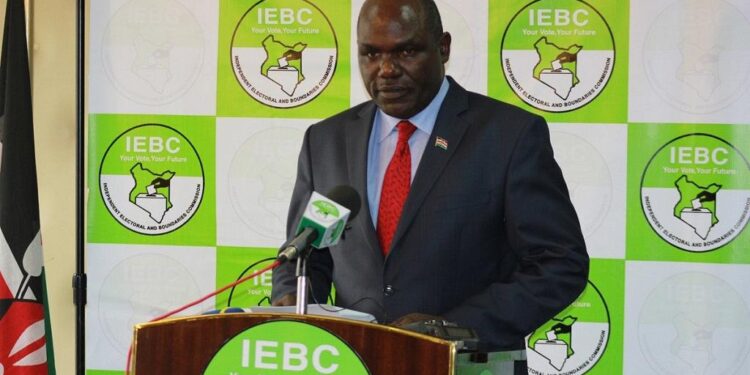 Presidential hopefuls in the August General Election have less than a week to name their running mates after the Independent Electoral and Boundaries Commission (IEBC) dismissed a petition by Azimio la Umoja and maintained that the Thursday, April 28, deadline still stands.

IEBC Chairman Wafula Chebukati on Sunday said the choice of running mate is interlinked with the ongoing nomination exercise whose period closes on the same day.

In a statement to political parties, he cited article 148 of the constitution that states, each candidate in a presidential election shall nominate a person who is qualified for nomination for election as president, as a candidate for deputy president.

Chebukati noted that there shall be no separate nomination process for the deputy president because the presidential candidate and his running mate is a conjoined ticket and process.

The IEBC chair further pointed out the qualifications of a president and deputy president were the same. The qualification requires one to be a Kenyan citizen, able to run for member of parliament, nominated by a political party and nominated by not fewer than 2000 voters from each of the majority counties.

“It is our considered view that by the time the party nomination window closes, presidential candidates should have nominated their running mates. And thereby the commission further stated that, the requirement that presidential and gubernatorial candidates submit names of their running mates by 28th of April 2022 falls within the commission’s mandate,” stated Chebukati.

The move is likely to jolt both the Azimio La Umoja and Kenya Kwanza camps that have kept the running mate a closely guarded affair.

The Azimio La Umoja team has formed a technical committee that will select a running mate for its presidential candidate Raila Odinga.

The camp had earlier protested the April 28 running mate deadline, prompting the clarification from IEBC. Azimio La Umoja presidential secretariat spokesman Professor Makau Mutua had claimed the nomination deadline was not the ultimate condition but just one of the qualifications for those seeking to run for presidency.

Equally, Mutua noted that IEBC scheduled 29th May to 6th June as the dates for clearing presidential candidates alongside their running mates before the IEBC chairperson.

Elections Kick-Off In The 8 Electoral Areas