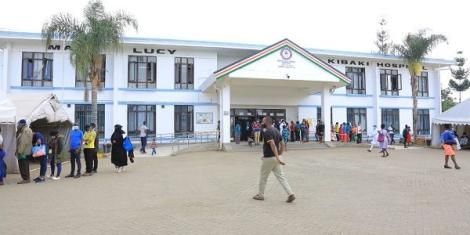 A committee looking into cases of medical negligence at Mama Lucy hospital has raised concerns about the design of the hospital.

The team of nine members among them the Kenya Health Professions Oversight Authority CEO Dr Jackson Kioko undertook an inspection of the facility.

The hospital has been under scrutiny after several cases of complaints from the public were aired.

The case of a mother who lost her life delivering twins over what the family termed as negligence on the side of the hospital was one of the major cases that led to the probe into the Mama Lucy Hospital.

A report tabled before the Senate health committee compiled by the team after the inspection was conducted on November 9, noted that the hospital was built in a way that hampers smooth and logical patient flow.

According to the report, the theatre for instance is located on the first floor opposite the main entrance into the maternity ward, yet the labour ward is located close to the other end of the ward.

“This means that a patient with complicated labour has to be wheeled across the entire ward to get to the theatre,”

“Similarly, a patient admitted through the accident and emergency has to be wheeled past the main entrance into the hospital, up the ramp to get to the theatre,” the report read.

The report further explained that delivery rooms were small and the three resuscitaires are placed outside the labour ward, as the room can only handle four beds.

According to the team, resuscitaires should be placed in the room where the babies are delivered and should be used to give immediate care to the newborns and not used only when the baby has been deemed stable by the midwife.

In general, the level 5 facility which offers both primary and secondary healthcare services have a total of 188 inpatient bed capacity and serves a population drawn from the whole of Eastlands, Nairobi and neighbouring Machakos and Kiambu counties.

Oga Obinna Rules Out Marriage After Female Fans Professed Their Love for Him: "Sioi"