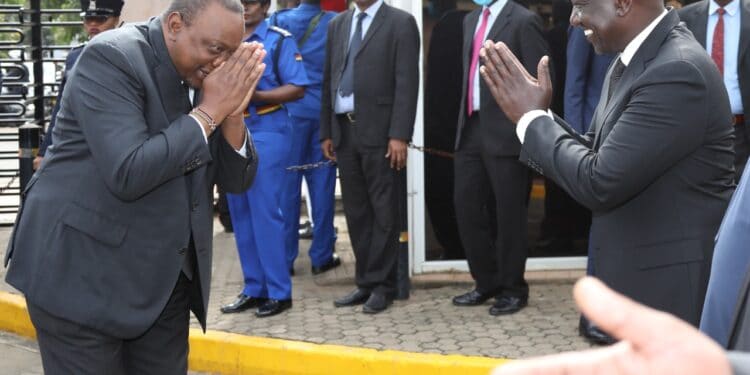 President Uhuru Kenyatta and his Deputy William Ruto displayed a rare show of unity Monday, when they appeared together publicly for the first time in a long time, to view the body of former President Mwai Kibaki.

The two statesmen now turned foes have been throwing insults at each other in recent weeks as the succession politics hots up, with Kenyatta declaring publicly that he won’t allow Ruto to succeed him.

President Kenyatta is openly campaigning for Opposition leader Raila Odinga who was endorsed recently as the Azimio La Umoja One Kenya presidential candidate.

These differences have set Kenyatta and Ruto apart, and they have not been seen in public together until Monday when they went to Parliament to pay their last respects to Kibaki who died on Friday aged 90.

Members of the two leading protagonist coalitions were seen exchanging pleasantries ahead of the president’s arrival, contrary to the barbs they have been throwing at each other on the campaign trail.

Former President Mwai Kibaki’s body arrived in Parliament today at 7am for a three-day public viewing.

The government has already declared Friday a public holiday to enable all Kenyans to participate in the State Funeral service ahead of the Saturday burial in Nyeri.