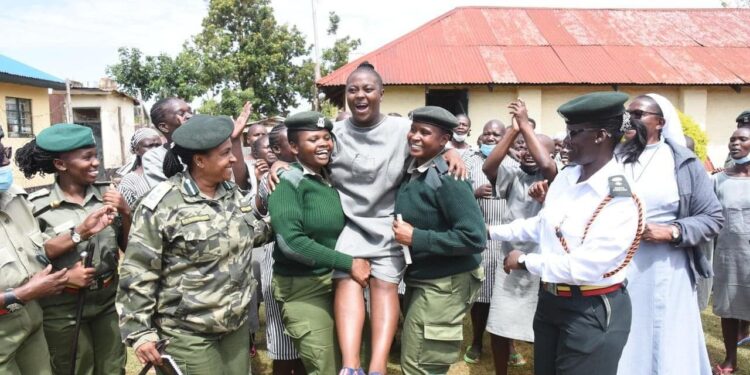 Amelia Jacobeth Liabule, 31 an inmate who scored 402 marks in the just released 2021 Kenya Certificate of Primary Education (KCPE) results, was a university graduate.

Records obtained showed that Ms Laibule attended St Clares Musoli Primary School and sat for the KCPE in 2003, before proceeding to Eregi Girls Secondary School between 2004 and 2007 where she sat for her Kenya Certificate of Secondary Education (KCSE) and scored B-.

It is understood that Ms Liabule joined Egerton University in 2009, and graduated in 2013 with a BSc in Environmental science degree. She later enrolled postgraduate degree in Environmental health in 2018 at the Kenyatta University, but was discontinued after she was arrested.

Court records show that she was charged with the murder of her 67-year-old mother Leoninda Benedina Nabwangu, a pastor at Church of God Kakamega on January 12, 2021 in Shisembe village. She was released on a cash bail of Sh250, 000.

Last week, she was back in court before Kakamega resident judge Farah Amin for the mention of her case.

However, she will have to wait until April, 14 for the hearing of the case.

It is while she was in custody that she enrolled for KCPE.

On Monday, when Education CS George Magoha announced the 2021 KCPE results, Ms Liabule pulled a surprise by scoring 402 marks in the exam.

She said after she was arrested and charged with murder, life has not been easy for her.

But the sudden turn of events in her life did not dampen her spirits as the prison doors slammed behind her, cutting off the freedom she was used to enjoying.

But she decided not to mourn about her condition and focused on her future. For a start, she decided to use her free time to study and prepare for the KCPE exams.

She did not want the burden of the murder charges to weigh her down and decided to focus on something positive in her life.

Her enduring efforts in the past one year have paid off with a good performance in the exam, and she says she plans to continue studying and prepare for other future exams.

Ms Liabule did not enjoy the normal classroom atmosphere and setting when preparing for the exam but she managed to beat the odds and deliver a good performance that has lit up the faces of prison authorities and her colleagues.

There were celebrations at the Kakamega Women’s Prison after Ms Liabule and an inmate, Justine Wasike, 29, scored impressively in the exam.

“The library at the prison has very few books and our teacher has been sparing time to ensure that we were focused and worked hard during our preparations for the exam,” Ms Liabule said.

“At the end of the day, our patience and hard work paid off and that is why we are here celebrating.”

Ms Wasike, who scored 312 marks, is serving a 10-year sentence for murder. She was convicted in 2018 but remains confident that the future ahead is bright.

Ms Liabule said: “The fact that one is behind bars does not mean your brain is behind bars. All one needs to do is to stay focused and go for the available opportunities to leave a mark on those around you.”

She added: “Being behind bars is not the end of the world. All that one needs is to be disciplined and remain focused in life. I decided to spend part of my time studying. I made a decision to prepare for the Kenya Certificate of Primary Education exam and I’m happy to have scored good marks.”

The officer in charge of the prison, Ms Doreen Anabaka, was excited by the performance.

“They have given us a sterling performance despite the many challenges they have been going through while preparing for the exam,” she said.

At the GK Kakamega GK Prison, Musundi Fred Mwachi, 25, who is remanded for murder, scored 383 marks.

Another inmate, Edwin Makokha Oduor, 25, who is serving 15 years for defilement, scored 369.

The head of the prison, Mr Japheth Onchiri, said the two inmates had managed to overcome their difficult conditions and open a new chapter in their lives by excelling in the exam.

“This is quite an effort they have shown and we are planning to continue supporting more inmates to pursue their academic ambitions in life as they serve their sentences to become better people in society,” Mr Onchiri said.

Moses Kuria Submits His Name For Nomination To Parliament