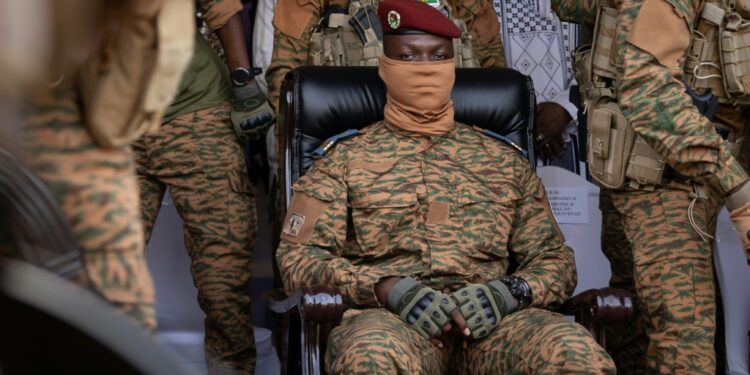 Attacks in Burkina Faso have increased since October and now especially target civilians, according to junta leader Captain Ibrahim Traore, who took power last year on a vow to quell jihadist violence.

The extremists are switching tactics to focus on civilians, Traore said in remarks on Tuesday, days after dozens of women were kidnapped in the country’s insurgency-hit north.

“Today, another phase has been launched by the terrorists,” Traore said at a meeting at the University of Ouagadougou with students from around the country.

“Militarily, our men are determined to confront them, so they are starting to attack civilians, innocent people, humiliate them, kill them.

Traore admitted: “Since October, the number of attacks has multiplied.”

“We are determined to resolve this terrorist issue,” he said.

“We did not choose this war. Burkina did not attack anyone. We were attacked and we have been defending ourselves ever since.”

Traore, 34, on September 30 led Burkina’s second military coup in little more than eight months, a takeover stoked by anger within the army over the mounting toll from the insurgency.

Thousands have been killed in the landlocked West African country since jihadists began launching cross-border raids from neighboring Mali.

Some two million people out of a population of twenty-one million have fled their homes and more than a third of the country is outside government control.

Assaults on the security forces and civilians have increased in recent months, especially in northern and eastern regions bordering Mali and Niger.

Around fifty women were kidnapped last week as they foraged for food near the northern town of Arbinda.

Arbinda lies in the Sahel administrative region an area under blockade by jihadist groups and difficult to resupply.

A security source contacted by AFP said an airlift to resupply Arbinda began on Tuesday morning.

“It was about time — we have had nothing to eat for months. Just leaves which are also becoming scarce,” Souleymane, a resident contacted by AFP, said.

“The ideal thing would be to organize a road convoy quickly because we have a big population here.”

The Burkinabe general staff late Tuesday asked transport companies to make available “free of charge or at a reduced price” trucks with drivers to help the resupply.

The United Nations says one million people live in blockaded areas in the north and east.

In many areas, crops can no longer be grown because of the security risk.

“This Is My Choice And My Happiness”Says 25-Year Muima Planning To Wed Lover, 85