by David Nzioki
in News
0 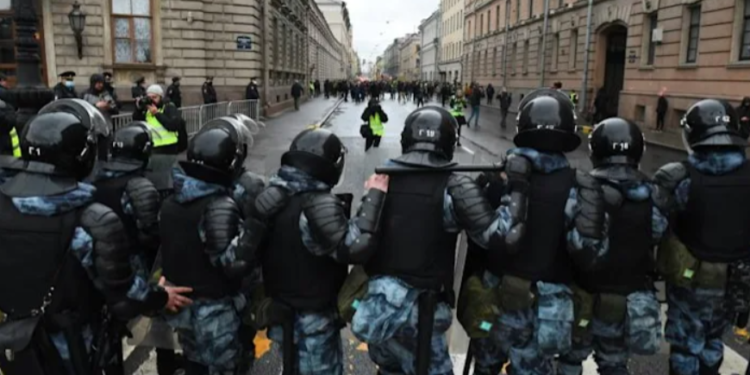 The vote in the lower house State Duma is part of broader efforts by Russian authorities to snuff out the activities of Navalny, who is serving two-and-a-half years in a penal colony outside Moscow on old fraud charges he says are politically motivated.

It comes alongside a trial beginning in June to decide whether to add the opposition politician’s network of regional offices and his Anti-Corruption Foundation (FBK) to a list of “terrorist and extremist” organizations.

It also comes ahead of parliamentary elections in September, in which the deeply unpopular ruling United Russia party is expected to struggle.

Seeing an opportunity, Navalny had been gearing up to roll out his Smart Voting strategy, which calls for voters to cast their ballots for the candidate most likely to defeat Kremlin-linked opponents.

“They can adopt a whole bunch of laws, but Smart Voting will still work,” FBK said on Twitter.

The draft legislation debated Tuesday would affect not only senior members and activists of Navalny’s political network but tens of thousands of Russians who supported its work with donations.

Absolute disgrace
If passed, it will bar leaders of extremist groups from standing in parliament elections for five years, said lawmaker Vasily Piskaryov.

He said it would also block members of the groups and other people involved in their work — including those who helped finance them — for three years.

Deputies voted 293 in favor of the bill to 45 against with two abstaining.

“It violates so many constitutional norms that I don’t even know how to talk about it and how to vote for it,” said Valery Gartung of the party A Just Russia, addressing his fellow lawmakers in parliament.

The bill will go through two more readings in the lower house, with the second reading scheduled for May 25.

After passing a third reading, the legislation will then need to be approved by the upper house Federation Council before President Vladimir Putin signs it into law — steps that are considered formalities.

In a post on Telegram messenger, Navalny’s team dismissed the legislation as an “absolute disgrace”.

“Because of this law, tens of thousands of people in Russia will be stripped of the right to be elected with a snap of the fingers,” the team said.

The measure would equate the organizations with the likes of the Islamic State group and Al-Qaeda.

It would also ban Navalny’s groups from operating in Russia and put its supporters at risk of lengthy prison terms.

The group, which in recent years helped support the Smart Voting strategy and inflict a number of losses for Kremlin-linked candidates in local polls, disbanded to shield its members and supporters from possible prosecution.

For its part, the FBK routinely publishes investigations into alleged graft by officials at all levels of government.

Navalny’s supporters routinely face police searches and arrests for their activism, with the pressure ballooning since the Kremlin critic returned to Russia in January from Germany where he had been recovering from a poisoning attack.

Most of his top allies have since been placed under house arrest or left the country, with several announcing publicly they were quitting the FBK after prosecutors requested the extremism tag.