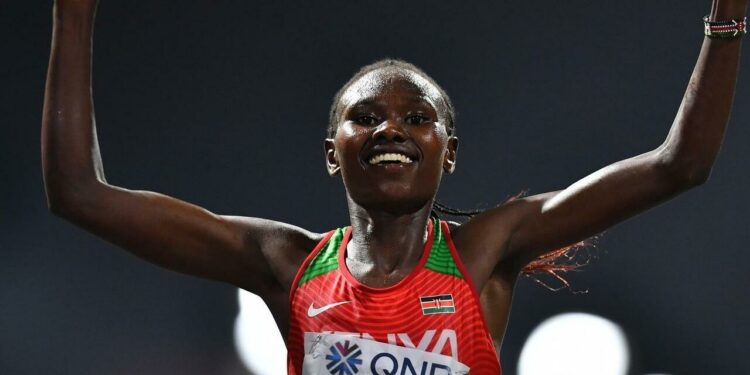 The World Champion representing Kenya Prisons Service led from gun to tape crossing the finish line in 31:47.9 ahead of her teammate Alice Aprot who finished second in 32:01.2

Chepngetich who recently joined the service said she was using the race as part of her build up towards this year’s World Championships where she will be seeking to defend her title in Oregon, USA.

“This was my second 10k race after the Prisons Championships and I thank God for yet another victory in track. I have started my preparations for the World Championships and I was using this race to work on my speed,” Chepngetich said on her post-race interview.

With less than four months to the global event, Chepngetich who won Nagoya Women’s Marathon last month said she will be competing in one race before heading to the US for the Worlds.

“I think I will be competing in a 10km race in my final preparations for the World Championships. Defending the title is my top priority this season,” she said.

Earlier on, Africa 100m record holder Ferdinand Omanyala of the National Police Service clocked 10.03 seconds to win his heat in the men’s 100m and seal a berth in Wednesday’s semi-finals.

“This being my first championships this season in Kenya I think I am on the right track for major events. If we can run sub-10 in April then that shows things can only get better ahead of a busy schedule. My target is to compete in all major events this season beginning with the Africa Championships,” said Omanyala.

Lucy Omondi of KDF took the top honours in the women’s hammer throw after hauling 52.55m ahead of Linda Oseso of Prisons who threw 49.28m while Roselyne Rakamba of Police closed the podium with a throw of 48.95m.

The three-day event which doubles up as trials for the Africa Senior Athletics Championships to be held in Mauritius in June will continue on Wednesday.

"I Will Walk In Kibaki’s Shoes And Reclaim Nairobi’s Lost Glory," – Polycarp Igathe

Gachagua Says the Govt’ will Not Interfere in Judicial Rulings