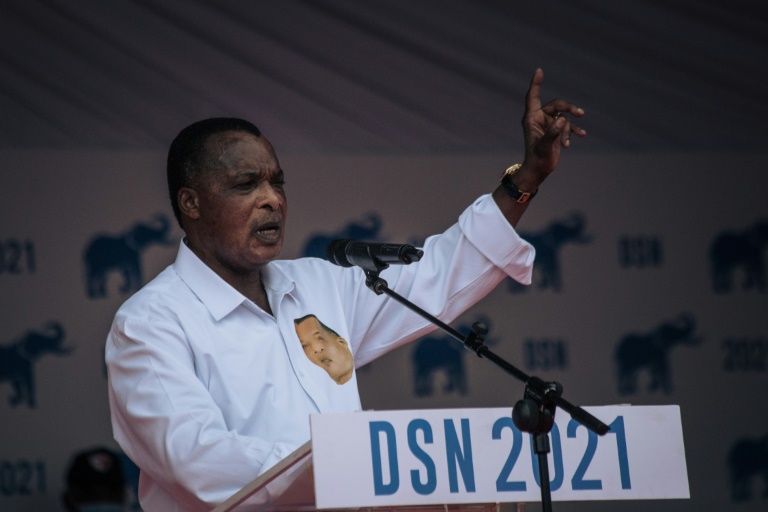 AFP - Sassou Nguesso is one of the world's longest serving rulers

Nicknamed the “Emperor” by some peers, Congo’s veteran President Denis Sassou Nguesso on Tuesday won another five-year term that will see him steering his country for over four decades.

A former paratrooper who swapped his combat uniform for fine tailored suits, Sassou Nguesso is one of the world’s longest-serving rulers.

His counterparts in Ivory Coast and Guinea recently referred to the veteran survivor as the “Emperor” of the oil-rich country, which he rules with an iron fist.

Sassou Nguesso has already accumulated more than 36 years in office — at 77, he is four times older than the average Congolese, whose median age is 19, according to UN figures.

“At these times of uncertainty, the people need men of experience. And I am putting my experience at the service of all the young,” he said on the campaign trail.

An ethnic Mboshi, Sassou Nguesso was born in Edou, 400 kilometres (250 miles) north of the capital Brazzaville, and joined the military as France’s colonial era in Congo ended.

He supported a 1968 movement that toppled president Alphonse Massamba-Debat and brought Marien Ngouabi to power.

Named head of a commando unit and then defence minister, Sassou Nguesso became the regime’s ideological head and co-founded the Marxist-leaning Congolese Labour Party (PCT) in 1969.

In 1979, two years after Ngouabi was assassinated, Sassou Nguesso became head of state. He aligned his country with the Soviet Union but after its fall was forced to introduce multi-party elections in 1991.

Defeated in a presidential poll a year later, he went into exile in France — a country that has consistently backed him — while his country plunged into violence and civil war.

The decade that followed was wracked with civil war, from which Sassou Nguesso ultimately emerged victorious in 1997.

He has won every single election since then, in conditions that the opposition has slammed as fraudulent and thanks to a 2015 constitutional amendment that lifted a ban on presidential candidates older than 70.

In 2016, he won re-election in the first round with over 60 percent of the vote. The result was challenged by his two poll rivals Jean-Marie Michel Mokoko and Andre Okombi Salissa who are currently serving 20-year jail terms for allegedly “undermining state security”.

Rampant Corruption and Mismanagement of Country

Sassou Nguesso also failed to implement grand infrastructure and development projects on the back of oil money with the programme virtually frozen since 2014 when oil prices plummeted.

He has also faced down challenges from rebels and brushed off accusations of rampant corruption and mismanagement of resources, especially in the state-run oil sector on which Congo heavily depends.

Transparency International classed Congo 165th out of 179 countries in its 2020 Corruption Perceptions Index.

Members of the Sassou Nguesso family were placed under investigation in Paris in 2017 in a case involving alleged “ill-gotten gains”.

Guinea Trial to Start on Anniversary of 2009 Massacre