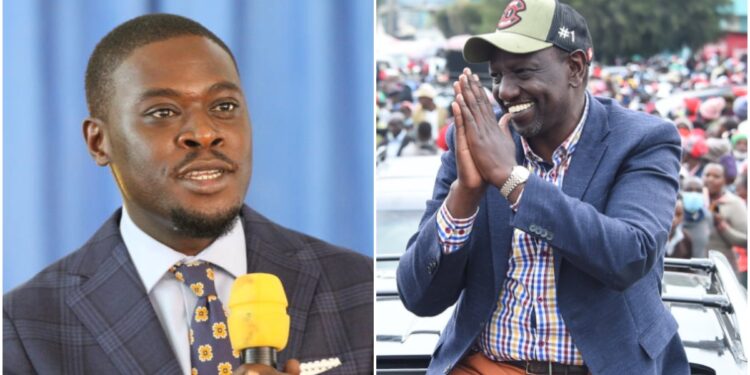 Nairobi Senator Johnson Sakaja has joined Deputy President William Ruto’s UDA party on whose ticket he will be vying for the city governor seat.

His move comes even as Starehe MP Charles Njangua alias Jaguar rubbished claims he has stepped down for EALA MP Simon Mbugua.

Sakaja said he decamped from Jubilee long ago and joined UDA as he prepares to succeed Governor Anne Kananu.

“I have never joined ANC. When I left Jubilee, I went straight to UDA,” Sakaja told the Star.

The revelations come as a shocker to many as the senator had been linked to Musalia Mudavadi’s ANC.

Sakaja has been a close ally of the ANC boss and has been pushing for his presidency.

He traversed parts of the country, drumming up support for Musalia to succeed President Uhuru Kenyatta.

Until Mudavadi teamed up with the Deputy President under the Kenya Kwanza Alliance, Sakaja represented ANC in the One Kenya Alliance technical committee.

It is said Sakaja and Kakamega Senator Cleophas Malala negotiated the deal that saw Mudavadi join forces with the DP.

Sakaja will face off with former Starehe MP Margaret Wanjiru in the UDA primaries scheduled for next Thursday.

The Star established that the DP has been trying to strike a deal between the two leaders.

“There are attempts to unite us but I am ready for nominations,” the senator said.

The winner of the UDA primaries will set up an epic battle with Azimio-One Kenya coalition for the city’s top seat in the August 9 general election.

Azimio, a coalition of 26 parties, has attracted at least four aspirants, with three seeking the seat on the ruling Jubilee Party.

Reports indicate that the party was courting former deputy governor Polycarp Igathe for the seat.

Westlands MP Tim Wanyonyi is the sole ODM aspirant for the seat.

There are reports Azimio has formed a committee to look into areas where the coalition would field a single candidate to enhance its chances of winning.

Nairobi is among the counties where the coalition mulls fielding one candidate for every seat.

Meanwhile, MP Jaguar has said he will go all the way to the primaries after reports emerged that he had succumbed to pressure by the UDA leaders to step down for Mbugua.

“Those are propaganda. I have not stepped down for anybody and I am in the race till the end,” he said.

The legislator also took to his social media pages to deny the claims.

“I was elected by the people of Starehe and I have the mandate to respect them. I will not be party to any negotiations,” he said.

EPL: Everton Stumble Deeper Into Trouble With 3-2 Defeat At Burnley