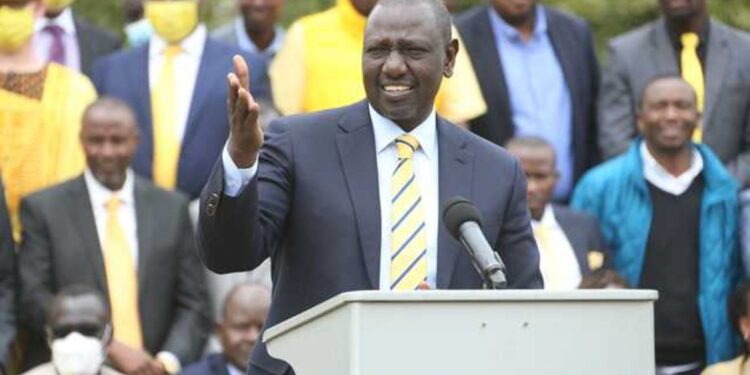 Deputy President William Ruto has hit back at the head of state a day after he was accused of having plotted to impeach President Uhuru Kenyatta shortly after the 2017 polls.

“As deputy president I know what I must do, I will never, have never and would never do anything that would bring down the government,”

“Respect those of us who campaigned for Uhuru Kenyatta, you are desperate spreading falsehoods and propaganda. I will never and have never been part of anything to bring down the government, shame on you shame on you you deserve nothing but shame,”

Kilifi Gubernatorial aspirant and Malindi MP Aisha Jumwa who was hosting the DP said Ruto’s competitors had ran out of ideas, and were now resorting to cheap propaganda.

This comes just a day after President Kenyatta who hosted a delegation of at least 3,000 Mt Kenya region elders claimed that his deputy had planned to impeach him and seize power through the back door.

Kenyatta, who was addressing Gìkùyù elders who visited him at State House, Nairobi said Ruto had an insatiable appetite for power and was keen on fomenting dissent from within the Jubilee party, to elbow his boss.

The head of state also took time to explain to the elders why he reached out to ODM Leader Raila Odinga and shook hands in March 2018.

Explaining the Handshake, President Kenyatta told the elders that he reached out to his arch-rival turned ally, to steady the government, and slow puncture what he termed Ruto’s grand plan to sabotage his administration and ascend to power through the backdoor.

Kenyatta accusing Ruto of opposing the handshake and pushing him to play hard ball against the ODM leader, with whom he had faced off in the August 2017 presidential race, whose outcome was overturned by the Supreme Court.

With the Presidential race just 135 days away, the president justified his choice of Odinga as his preferred successor, terming Ruto impatient and a leader who focused more on the 2022 succession politics than execution of his duties as his principal assistant.

The Head of State took the opportunity to call on all parties allied to the Azimio La Umoja outfit in central Kenya to wisely field candidates and ensure they do not split votes, to the advantage of candidates allied to Ruto’s UDA party.

Kenyatta urging the elders and political leaders present to mobilise their supporters to vote for Odinga, but also emerge with a majority of Members of Parliament in the National Assembly and Senate, Governors and MCA’s, to secure the community’s and regional interests in the government that will be established after the August polls.

“I Am Best Suited to Be Raila Odinga’s Running Mate,” Says CS Munya

Three People Die in a Suspected Pact-Suicide in Nairobi

Sudi Proposes To Debate Raila On Behalf of Ruto