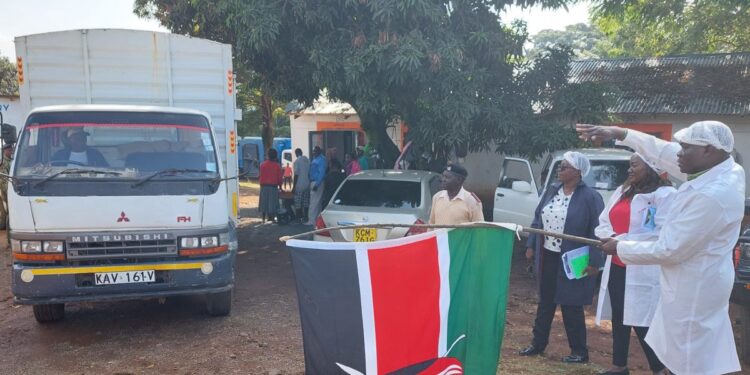 The government has formed a multi-agency team to crackdown on unscrupulous traders hoarding subsidized maize flour.

Some retailers and wholesalers, he said were stock piling the flour in anticipation of higher prices dealing a blow to the government’s directive to enhance access to the product.

“This flour is meant for consumption not storage. We have enough stocks therefore just buy what is enough for you,” he said.

This, he said was illegal adding that surveillance teams have been dispatched across the country to bring to book those involved in the vice.

“We are going to engage all government machinery to ensure that all traders hoarding the subsidized maize flour are arrested and prosecuted,” he said.

Out of the Sh. 4 billion released by the government to facilitate the program, Sh. 256.7 million, he said has been paid to 122 millers to ensure that Kenyans access maize flour at Sh. 100.

The money, he said is expected to hit the accounts of the millers on Monday adding that an additional Sh. 500 million pending bill dating back to 2017 was also being processed.

Dr. Owino attributed the shortage of the commodity in supermarkets to credit arrangements which were unfriendly to the millers.

“Supermarkets don’t buy maize flour in cash. They are supplied to sell and pay after 45 days. Therefore, millers are finding it difficult to supply the subsidized maize flour to them,” he said.

Speaking in Kisumu on Sunday during an inspection tour of the boarded millers in the area, Dr. Owino said the challenges experienced during the launch of the program have been addressed urging members of the public to be on the lookout and report any trader selling the flour above Sh. 100.

The four weeks subsidy, he said has gone a long way to cushion Kenyans against the high prices of the commodity expressing optimism that the prices were set to stabilize.

“We have enough stocks in the counts and we are also expecting to harvest soon and this will help stabilize the prices,” he said.

The government, however, he said will review the program after the four weeks and make a decision on the way forward to ensure that Kenyans continue to have access to the essential commodity.