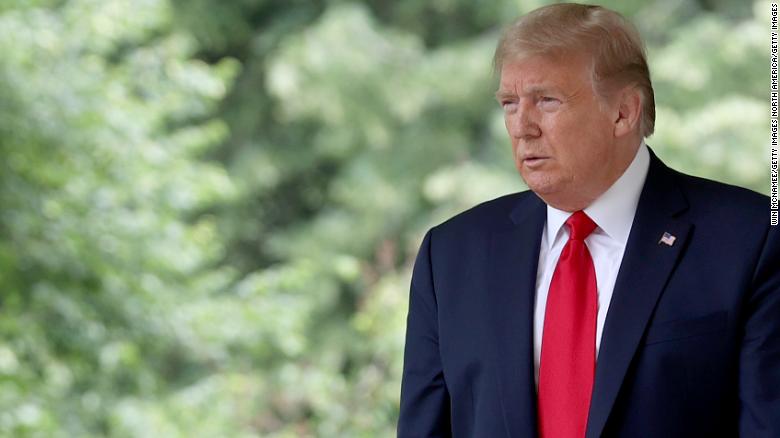 Trump hid in a bunker as protests raged across America.

As protesters gathered outside the White House Friday night in Washington, DC, President Donald Trump was taken to a secure area late Friday as a condition “red” was declared at the White House amid violent protests outside the building sparked by the death of George Floyd, a person familiar with the matter said.

The President was there for a little under an hour before being brought upstairs.

It’s not clear whether the measure was repeated in the two subsequent nights of protest around the White House, but the protesters weren’t as close to the fence on those nights as they were on Friday.

Demonstrators skirmished with the U.S. Secret Service in Lafayette Square late Friday alongside an outer ring of temporary fencing set up along the edge of the park, leading to six arrests and “multiple” injuries among the agency’s personnel, the Secret Service said.

In a series of tweets Saturday morning, Trump appeared to revel in the potential for violence outside the White House, warning that Friday’s protesters would have been met by “vicious dogs” and “most ominous weapons” had they dared to breach the fence around the property.

A law enforcement source and another source familiar with the matter tell CNN that first lady Melania Trump and their son, Barron, were also taken to the bunker.

The law enforcement source familiar with protocol said that if authorities moved Trump, they would move all protectees, meaning Melania and Barron.

The second source told CNN that “if the condition at the White House is elevated to RED and the President is moved” to the Emergency Operations Center “Melania Trump, Barron Trump, and any other first family members would be moved as well.”

Trump praised the Secret Service the next day for its handling of the protests outside the White House Friday night in the wake of George Floyd’s death last week in Minneapolis.

The New York Times first reported Trump was taken to the presidential bunker.

On Saturday, only hours after the protests outside the White House had ended, Trump declared himself safe as he lashed out at the city’s Democratic mayor and raised the prospect of his supporters gathering in place that night in what would amount to a counter-protest.

In a series of tweets, Trump commended the US Secret Service for protecting him inside his fortified mansion Friday evening, saying he couldn’t have felt “more safe” as protesters gathered outside over Floyd’s death. The President suggested that dogs and weaponry were waiting inside the gates.

Trump claimed DC Mayor Muriel Bowser did not permit the DC police to “get involved,” though Secret Service later said they were on the scene.

Later in the day, speaking at NASA’s Kennedy Space Center in Florida after the launch of the NASA/SpaceX rocket, Trump admonished protesters across the country, expressed support for the “majority of police officers” and blamed Antifa and the “radical left” — without any proof — in his most in-depth remarks since Floyd’s death and the ensuing nationwide demonstrations.

“I stand before you as a friend and ally to every American seeking justice and peace. And I stand before you in firm opposition to anyone exploiting this tragedy to loot, rob, attack and menace. Healing, not hatred, justice, not chaos, are the mission at hand,” Trump said.

Trump added that the voice of “law-abiding citizens must be heard and heard very loudly.”

“We must defend the rights of every citizen to live without violence, prejudice or fear,” Trump said before supporting “the overwhelming majority of police officers who are incredible in every way and devoted public servants.”

“No one is more upset than fellow law enforcement officers by the small handful who failed to abide by their oath to serve and protect,” Trump added.

In his Saturday morning Twitter messages, Trump did not seek to lower the temperature or console Americans who find themselves facing parallel health and racial crises.

The decision to physically move the President came as protesters confronted Secret Service officers outside the White House for hours on Friday — shouting, throwing water bottles and other objects at the line of officers, and attempting to break through the metal barriers.

At times, the crowd would remove the metal barriers and begin pushing up against the officers and their riot shields.

The Secret Service continually replaced the barriers throughout the night as protesters wrestled them away.

Protesters pushed hard enough a few times that officers had to walk away with what appeared to be minor injuries.

At one point, the agents responded to aggressive pushing and yelling by using pepper spray on the protesters.

Throughout the night, protesters could be heard chanting their support for Floyd, an unarmed black man who died after being pinned down by a white police officer, and their dislike of Trump.

The protest, which began around 10 p.m. ET, Friday night outside the White House, had mostly quieted down by 3:30 a.m. ET, Saturday morning.

The crowd thinned out and Secret Service officers were able to expand their perimeter and barriers around Lafayette Park across from the White House.

Six arrests were made during the protests, the Secret Service confirmed in a statement Saturday afternoon.

The President on Thursday had used the threat of police retaliation and military intervention in Minnesota where protests turned violent and destructive — saying on Twitter that “when the looting starts, the shooting starts.” Trump’s weekend tweets also invoked imagery tied to brutal civil rights-era police tactics.

Now, a serious divide has emerged among the President’s top allies and advisers over how the President should address several nights of protests and riots.

Trump is being urged by some advisers to formally address the nation and call for calm, while others have said he should condemn the rioting and looting more forcefully or risk losing middle-of-the-road voters in November, according to several sources familiar with the deliberations.

Two Baringo MCA’S go to Hiding after the fear for their Lives.