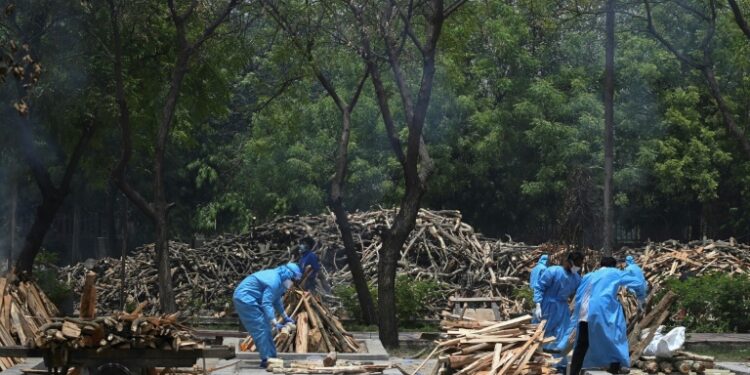 Health workers prepare the funeral pyres of people who have died of Covid-19 at a cremation ground in New Delhi, India | AFP

The United States drug regulator authorized the Pfizer-BioNTech vaccine for children aged 12-15 as the country aims to speed up its Covid-19 recovery, but the huge outbreak in India persisted with known coronavirus deaths approaching 250,000 on Tuesday.

With some wealthy nations easing restrictions thanks to rapid inoculation drives but many others struggling to secure doses, the head of the World Health Organization slammed so-called “vaccine diplomacy” and called for cooperation without strings attached.

Among those under pressure to do more for poorer countries is the United States, where more than 115 million people have been fully vaccinated and authorities have started to ease curbs to help with the recovery of the world’s biggest economy.

Those efforts got another boost Monday when the US Food and Drug Administration authorized the Pfizer shot for 12- to 15-year-olds.

“This is a promising development in our fight against the virus,” said President Joe Biden.

The US Centers for Disease Control said its advisory committee will now meet to discuss a recommendation for this age group.

The move has been criticized, however, by some public health experts who say these doses would be better used in other countries where highly vulnerable people are still waiting for vaccines, instead of a low-risk group in the United States.

The head of the European Medicines Agency said Monday that the EU could also soon approve the Pfizer-BioNTech jab for the 12-15 age group, as early as this month as several nations on the continent aim to revive their economies.

Ireland on Monday lifted domestic travel restrictions and Greece opened nursery, elementary and middle schools ahead of kicking off the tourism season from May 14.

But Spain, which at the weekend lifted a six-month state of emergency and allowed travel between regions, sounded a note of caution after joyful crowds celebrated in the streets without masks or social distancing.

Spain was one of the nation’s hardest hit in the first months of the pandemic, which has so far claimed more than 3.3 million lives worldwide.

India outbreak worries
The death toll in India, suffering from one of the worst outbreaks in the world, approached 250,000 on Tuesday — a number of experts warn is much lower than the actual figures.

The surge appeared to be easing in major cities.

But reports from rural areas suggested the virus is rampaging through India’s vast hinterland, home to around two-thirds of its 1.3 billion people and where access to healthcare is limited.

As many as 45 bodies washed up on the banks of the Ganges River near the border between Bihar and Uttar Pradesh — two of India’s poorest states.

Locals suggested to AFP that people were putting the bodies of relatives who had died of Covid-19 into the river because they could not afford wood for funeral pyres or because crematoriums were overwhelmed.

While some people even in normal times prefer to immerse bodies in the river rather than cremate them, the Times of India quoted an unnamed police officer as saying there has been a surge in the number of floating bodies found recently.

The WHO has warned that the B.1.617 variant spreading in India appears to be more contagious, classifying it as a “variant of concern at the global level.”

Vaccine diplomacy
The head of the WHO on Monday slammed nations for using Covid-19 vaccines as a tool for “geopolitical maneuvering,” saying the world needed transparent cooperation instead of competition.

He was responding to a question about allegations that countries such as Russia and China have donated large quantities of their homegrown vaccines to desperate nations in exchange for market access and influence.

And there were fresh concerns about the upcoming Tokyo Olympics, already delayed by a year, as Japanese superstar Naomi Osaka said she was “not really sure” the coronavirus-hit event should go ahead.
Tokyo and other parts of Japan are currently under a coronavirus state of emergency, and doubts are swirling about the ability of organizers to stage the Games safely.

And in Hong Kong, authorities abandoned a plan to make vaccines mandatory for foreign domestic workers, mostly poor women from the Philippines and Indonesia.

Manila’s top diplomat had said the proposal “smacked of discrimination.”

In Vihiga, Farmers are Turning to Organic farming to Beat Climate Change Effects and Food Insecurity