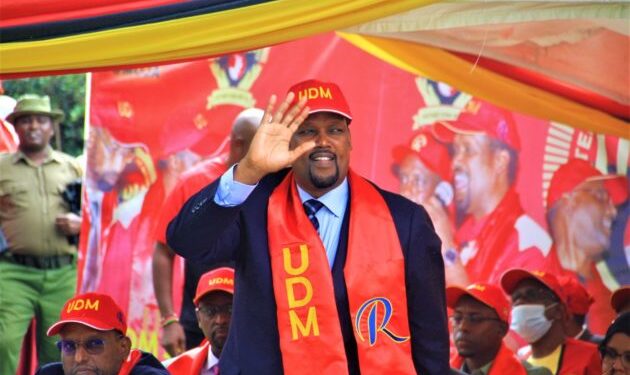 United Democratic Movement (UDM) party leader Ali Roba has faulted the stewards of the Azimio la Umoja One Kenya Alliance for handling matters within the coalition party with disregard of the laid-out mechanisms.

Mr. Roba who was speaking while issuing direct nomination tickets to aspirants pointed out that it appears like matters within the mega movement are being micromanaged by the Orange Democratic Movement (ODM) party, an affiliate party within the movement.

He said the affiliate parties within the coalition party led by Raila Odinga are playing second fiddle, yet they are equal partners.

“Even though we will face a lot of challenges because there is that feeling of lack of consultation and engagement. Programs are being run like it’s an ODM affair,” said Roba.

The Mandera Governor asserted that the Azimio One Kenya Alliance family is prone to facing political feuds due to competing interest but there is need for wide consultation without favoritism.

“Every new thing has teething problems. We feel the same problems aired by Machakos Governor Alfred Mutua. Our feeling is that they will come around and realize they have a very big team, and they need to carry along,” Roba said.

Roba who is eyeing for Mandera senatorial seat in the August 9th general however insisted that there is no room for division within the coalition as the train had already left the station.

“Where we have reached is a point of no return. A point where when you arrive you have one cause to proceed ahead and not looking for any alternate avenue. We are all behind Raila Amollo Odinga,” the UDM party leader stated.

This comes hours after Azimio La Umoja One-Kenya was formally registered as a Coalition Political Party.

The Registrar of Political Parties Ann Nderitu on Wednesday gave notice to members of the public that the outfit comprising of 23 political parties had been duly registered following due process.

The Coalition whose presidential flag bearer is Odinga had on April 1, 2022 deposited contents of the alliance agreement in Nderitu’s office.

The notice comes barely a day after four constituent parties belonging to the outfit and are members of the One Kenya Alliance (OKA) called for a halt of the registration citing unresolved issues which were however later addressed by the Coalition Party Secretariat.

The wing led by Wiper Party Leader Kalonzo Musyoka, Gideon Moi of KANU, Cyrus Jirongo of the United Democratic Party (UDP) and Ugenya MP David Ochieng party leader of the Movement for Democracy and Growth demanded that certain issues must be ironed out before the registration process is finalized.

“Our objection is premised on the fact that three (3) issues have not been agreed upon and are to be deliberated and agreed upon before the Agreement is fully registered,” the Secretary Generals of the four parties demanded in a statement.

The Secretary Generals claim that the agreement which was lodged at the Office of Registrar of Political Parties Ann Nderitu on April 1, 2022, was “was withdrawn and certain clauses amended or altered without the consent of all the parties.

The outfit alleged that the position of the running mate had been reserved for them in the initial agreement but now things appear to have changed.

The internal wrangles within the Coalition were hours later quelled by the Executive Director of the Coalition Secretariat Raphael Tuju who assured that “those are wedge issues, and we are going to discuss in-house and after we have agreed we will issue an expressive statement”.

Tuju assured that the principals within the coalition led by President Uhuru Kenyatta, Raila Odinga and Kalonzo Musyoka will be having a sit down to iron out the thorny issues on the coalition agreement.

“We will resolve the matters, how we will do that, we leave the details to the team in the coalition that are going to deal with the matter,” he stated.

“There is no cause for alarm our focus is important as our beacon is the August 9 polls. Our opponents on the other side will be very disappointed with this, “ he added.

Mistrust and betrayal within the political movement led by Odinga is shaping up to be a wedge threatening to tear apart the coalition.

City Into UCL Semis After Ill-Tampered Draw At Atletico