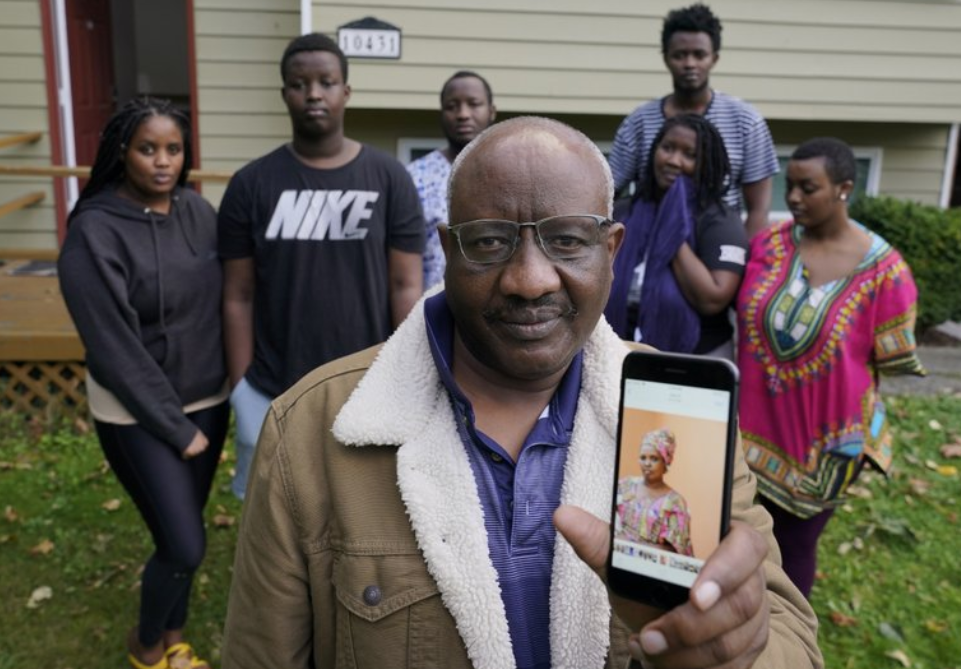 Sophonie Bizimana, center, a permanent U.S. resident who is a refugee from Congo, poses for a photo, Wednesday, Oct. 14, 2020, at his home in Kirkland, Wash., along with six of his children as he displays a cell-phone photo of his wife, Ziporah Nyirahimbya, who is in Uganda and has been unable so far to join him in the U.S. For decades, America admitted more refugees annually than all other countries combined, but that reputation has eroded during Donald Trump's presidency as he cut the number of refugees allowed in by more than 80 percent. - [Photo/AP Photo/Ted S. Warren)

For decades, America led the world in humanitarian policies by creating a sanctuary for the oppressed, admitting more refugees annually than all other countries combined, reports the AP.

That reputation has eroded during Donald Trump’s presidency, as he cut the number of refugees allowed in by more than 80%, and Canada replaced the U.S. as No. 1 for resettling people fleeing war and persecution.

Trump has arguably changed the immigration system more than any U.S. president, thrilling supporters with an “America first” message and infuriating critics who call his signature domestic issue insular, xenophobic, and even racist.

Before November’s election, The Associated Press is examining some of Trump’s biggest immigration policy changes, from halting asylum to stepping back from America’s humanitarian role.

The pain from a dismantling of the 40-year-old refugee program reverberates worldwide, coming as a record 80 million people have been displaced by war and famine.

They include an Iraqi woman who can’t get to America even though her father helped the U.S. military and a woman in Uganda who hasn’t been able to join her husband near Seattle despite a court settlement requiring cases like hers to be expedited.

“My kids here cry every night, my wife cries in Uganda every night,” said Congolese refugee Sophonie Bizimana, a permanent U.S. resident who doesn’t know why his wife isn’t with their family. “I need her, the kids need her.”

Trump has lowered the cap for refugee admissions each year of his presidency, dropping them to a record low of 15,000 for 2021.

The State Department defended the cuts as protecting American jobs during the coronavirus pandemic. Stephen Miller, a senior adviser to Trump, said the administration has sought to have refugees settle closer to their home countries and work on solving the crises that caused them to flee.

“You cannot solve this problem through American domestic resettlement. The solution has to be one of foreign policy,” Miller told the AP.

The administration also narrowed eligibility this year, restricting which refugees are selected for resettlement to certain categories, including people persecuted because of religion and Iraqis whose assistance to the U.S. put them in danger.

Democratic lawmakers denounced the lower cap and said the categories are shutting out many of the neediest. Democrat Joe Biden promises to raise the annual refugee cap to 125,000 if he wins Nov. 3.

As many as 1,000 refugees who were ready to travel now may not be eligible because they don’t fit into one of the categories, said Mark Hetfield, president of HIAS, a refugee resettlement group. For example, many Syrians may no longer qualify because no category is for those fleeing war, he said.

Even those who qualify are seeing their cases stalled because already-extensive vetting measures have become extreme. For instance, refugees now must provide addresses dating back 10 years, a near impossible task for people living in exile, according to the International Refugee Assistance Project.

TPS Rolled Back By Administration

The Trump administration also has rolled back other humanitarian protections, like Temporary Protected Status for 400,000 immigrants fleeing natural disasters or violence.

Those from countries like Honduras, Nicaragua, Haiti, Nepal and Syria now face deportation under a plan to end the program in January. Among them is Lili Montalvan, who arrived from El Salvador alone at 16 a quarter-century ago.

Living in Miami, she has a 6-year-old daughter and 18-year-old son who are American citizens. She can’t fathom raising her youngest in El Salvador. Their father was deported back to Peru last year.

“We have children, we have homes, we are part of this country,” said Montalvan, who cleans houses and sells baked goods.

The administration’s efforts to drastically reduce both illegal and legal immigration has triggered a slew of lawsuits.

Bizimana, the Congolese refugee, was a plaintiff in one settled Feb. 10 by a federal court in Seattle, which required the government to expedite the cases of some 300 families. But more than eight months after the legal victory, he’s still waiting for his wife to join him, and no one can tell him why.

Since arriving in 2014, Bizimana has hit hurdles every step of the way in his quest to reunite his family.

After one son arrived in 2016, the door slammed shut for everyone else in October 2017, when the Trump administration suspended refugee admissions for four months and then required more vetting of spouses and children on the verge of joining their families in the U.S.

After a federal judge limited those restrictions in December 2017, seven of his children were admitted, but not their mother. The International Rescue Committee, the resettlement agency that helped Bizimana, said the reasons for the delay are unclear.

He’s not the only one without answers.

Across the globe, an Iraqi woman whose father helped the U.S. military does not know why her case stalled. She spoke on the condition of anonymity for fear her family could still be in danger.

Her father worked closely with the U.S. Army as an Iraqi government official. Because of the relationship, American military doctors agreed to treat her two rare disorders, including one causing her immune system to attack her organs.

But her frequent visits to U.S. bases led to death threats from militias in her Baghdad neighborhood, and she and her family fled to Jordan in 2016.

The 51-year-old mother has waited ever since to get to the United States, where she has a brother in Syracuse, New York. Her family has been interviewed by U.S. officials and finished their background checks.

The New York-based International Refugee Assistance Project was helping her but closed the case in 2019 because there was nothing more it could do, caseworker Ra’ed Almasri said.

“I’ve been working for three years with these people, and they still have not gotten a decision, and yet this is a case with someone who has medical issues, her family helped the U.S. military and has been through so much,” he said. “I don’t see why it hasn’t moved forward.”

Her family first lived off savings, then help from her parents until that dried up when her father died. She sold some of her gold jewelry to pay rent on their modest apartment.

So much time has passed that her identification document from the U.N. High Commission on Refugees has expired, which means she can no longer prove a legal right to be in Jordan. She fears deportation to Iraq.

“This is our fifth year in Jordan, we are running out of money, we hope to receive the good news very soon,” the woman said.

Life has grown tougher for the more than 750,000 refugees in Jordan amid the coronavirus pandemic. Many cannot work or even leave their neighborhoods in Amman, where official checkpoints sealed off areas to slow the spread.

Almasri, the caseworker, said the desperation has become so acute some have attempted suicide.

“People feel stuck,” Almasri said. “They already are in a tough situation, and now they only see things getting worse.”

Man Stabbed as Robbers Make Away with Ksh 200,000 in Eastleigh