by Walter Kinyua
in News, Politics
0 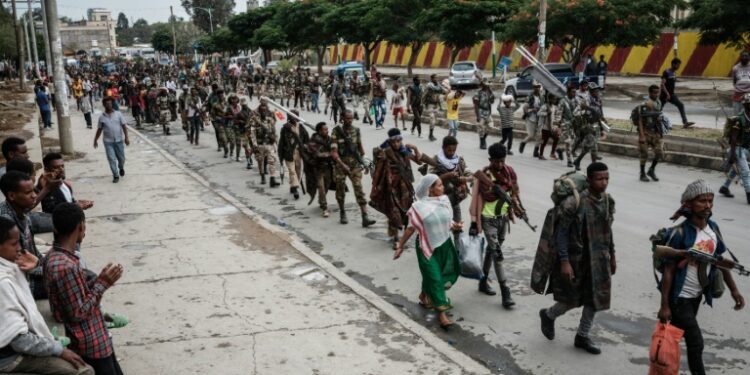 The United States on Monday condemned a speech by a prominent ally of Ethiopian Prime Minister Abiy Ahmed which compared Tigrayan rebels to the devil and said they should be “the last of their kind”.

“Hateful rhetoric like this is dangerous and unacceptable,” a State Department spokesperson told AFP in response to the speech last week by Daniel Kibret, who is often described as an adviser to Abiy and was nominated to the board of the state-run Ethiopian Press Agency last year.

Since fighting broke out in Ethiopia’s northern Tigray region last November, thousands have been killed and hundreds of thousands forced into famine-like conditions, according to the UN, and the war has recently spread to the neighboring Afar and Amhara regions.

The UN and US have recently voiced concern about hate speech and dehumanizing rhetoric in the conflict, but Daniel’s comments were the first to draw specific criticism from Washington.

At an event in Amhara attended by high-ranking officials, Daniel called for the total erasure of the Tigray People’s Liberation Front (TPLF), which dominated national politics for nearly three decades before Abiy took office in 2018.

“As you know, after the fall of Satan, there was nothing like Satan that was created… Satan was the last of his kind. And they (the TPLF) must also remain the last of their kind,” Daniel said.

“There should be no land in this country which can sustain this kind of weed.

“They should be erased and disappeared from historical records. A person who wants to study them should find nothing about them. Maybe he can find out about them by digging in the ground,” he said to applause.

Asked to clarify his comments, Daniel said in a text message to AFP: “‘They’ refers to the terrorist TPLF group.”

“There continues to be a gross misreading of statements issued by various entities without understanding the nuances of Ethiopian languages. TPLF sympathizer translations cannot be the basis of declaring statements as ‘hateful rhetoric’,” she told AFP.

“Statements made against a terrorist organization are purposely translated to make it seem that it has been made against our people of Tigray. That is a regrettable position of those who choose not to look beyond TPLF propaganda,” she added.

“The Ethiopian government is first to stand in guard of the people of Tigray.”

Truly disturbing
But Simon Adams, executive director of the Global Centre for the Responsibility to Protect, told AFP that Daniel’s remarks were “truly disturbing and reckless”.

“Given the surge in deadly ethnic violence in Ethiopia it is hard to take at face value the claim that he was only talking about the TPLF rather than Tigrayans in general,” he said.

“The references to people as weeds that need to be removed, or as monsters that must be erased, is classic hate speech. And calling for the total extermination of any political party and its supporters is tantamount to incitement to commit war crimes and other atrocities.”

Other groups also sounded the alarm.

“The chilling speech and calls expressed, from a powerful figure, do not deserve a platform and should be swiftly and unambiguously condemned at the highest levels,” said Laetitia Bader, Horn of Africa director for Human Rights Watch.

“Such statements can increase the risk of mass killing of civilians and targeting people simply because of who they are, where they live or where they were born,” said Nicole Widdersheim of the Simon-Skjodt Center for the Prevention of Genocide at the US Holocaust Memorial Museum.

The State Department spokesperson told AFP that Washington was “concerned about bellicose rhetoric on all sides of the conflict”.

US President Joe Biden on Friday signed an executive order allowing for sanctions against the warring parties in northern Ethiopia if they fail to commit to a negotiated settlement.

Pakistan Orders Inquiry into Killing of Journalist in Kenya