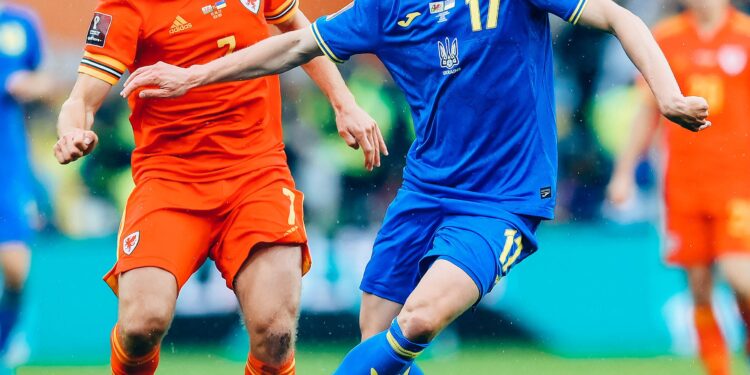 An Andriy Yarmolenko own goal sent Wales to their first World Cup in 64 years, as Ukraine lost 1-0 in a playoff on Sunday.

Ukraine had several chances to level the scoring or even put themselves ahead at Cardiff City Stadium, but it was a deflected Gareth Bale free kick that resulted in them falling out of the competition and sending Wales into the 2022 FIFA World Cup in Qatar.

Daniel James won a free kick for Wales 25 yards out, and Bale stepped up to take it on 34 minutes. He whipped in the ball, and it was headed in by Yarmolenko, Ukraine’s captain.

Oleksandr Zinchenko had the ball in the net early in the first half from a free kick, but the referee called play back, as he deemed Zinchenko had taken the kick too quickly.

Ukraine were unfortunate not to earn a penalty on 40 minutes when Yarmolenko went down under a heavy challenge from Joe Allen, but VAR (video assistant referee) did not intervene after referee Antonio Mateu Lahoz waved play on.

Asked what he had said to Yarmolenko, downbeat Ukraine coach Oleksandr Petrakov said he had simply thanked him and all the players.

Wayne Hennessey made a fine save late in the second half to ensure that Artem Dovbyk’s header stayed out.

Wales will join England, Iran and the United States in Group B for the World Cup, which starts on Nov. 21 and runs until Dec. 18.

At Least 22 Dead After India Pilgrim Bus Falls Into Gorge