Will Smith resigns from Oscars Academy over Rock slap 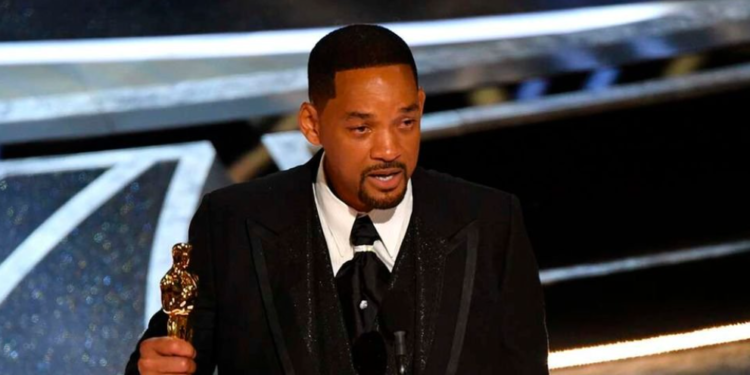 US actor Will Smith accepts the award for Best Actor in a Leading Role for "King Richard" onstage during the 94th Oscars at the Dolby Theatre in Hollywood, California on March 27, 2022 | AFP Robyn Beck

Will Smith resigned from the body that awards the Oscars on Friday, five days after he assaulted comedian Chris Rock during a live global broadcast.

The actor said his actions, which overshadowed Hollywood’s glitziest night of the year, were “shocking, painful and inexcusable.”

“The list of those I have hurt is long and includes Chris, his family, many of my dear friends and loved ones, all those in attendance, and global audiences at home,” Smith said.

“I betrayed the trust of the Academy. I deprived other nominees and winners of their opportunity to celebrate and be celebrated for their extraordinary work. I am heartbroken.”

Attendees at the Dolby Theatre watched open-mouthed as Smith mounted the stage and slapped Rock across the face after the comic made a joke about his wife’s closely cropped head.

Jada Pinkett Smith has alopecia, a condition that causes hair to fall out.

He returned to his seat and shouted obscenities at Rock, who has been widely praised for keeping a cool head and getting things back on track.

Half an hour after the astonishing attack, Smith was awarded the best actor Oscar for his role in sports biopic “King Richard.”

There have been conflicting reports in recent days over whether Smith was asked to leave the ceremony, with the Academy of Motion Picture Arts and Sciences saying he refused to go.

Disciplinary action
The group said this week it was starting disciplinary action against Smith — only the fifth Black man to win the movie world’s highest individual award for a man — and warned he could face a rare expulsion.

But on Friday, Smith pre-empted that punishment.

“I am resigning from membership in the Academy of Motion Picture Arts and Sciences and will accept any further consequences the Board deems appropriate.

“I want to put the focus back on those who deserve attention for their achievements and allow the Academy to get back to the incredible work it does to support creativity and artistry in film.”

Rock, who told a comedy audience in Boston this week he was “still kind of processing” events, has drawn praise for the way he handled events.

Oscars producer, Will Packer, told ABC that it was the comic’s professionalism that allowed the show to go on.

“Because Chris continued the way that he did, he completed the category. He handed the trophy to [best documentary winner] Questlove… it gave us license in a way to continue the show, which is what we were trying to do,” he said.

Packer said he had counselled against ejecting Smith from the theater after speaking to Rock as he walked off stage.

“I said: ‘Did he really hit you?’ And he looked at me and he goes: ‘Yes. I just took a punch from Muhammad Ali,'” Packer said.

Smith played the legendary boxer in the 2001 film “Ali.”

Packer said he had not been part of the conversation about removing Smith, but he had spoken against it.

“I immediately went to the Academy leadership that was on site and I said: ‘Chris Rock doesn’t want that,’ I said: ‘Rock has made it clear that he does not want to make a bad situation worse.'”

The standing ovation Smith received for his Oscar win has been heavily criticized, with accusations that Hollywood did not take the assault seriously.

Packer said the applause was for the actor and his work, not for the incident.

“I think that the people in that room who stood up, stood up for somebody who they knew, who was a peer, who was a friend, who was a brother, who has a three-decades-plus-long career of being the opposite of what we saw in that moment,” he said.

“I don’t think that these were people that were applauding anything at all about that moment, and all these people saw their friend at his absolute worst moment and were hoping that they could encourage him and lift him up and that he would somehow try to make it better.”

GSU Officer On the Run After Defiling 4-Year-Old Girl