Clashes on Morocco border as Madrid accuses Rabat of ‘blackmail’ 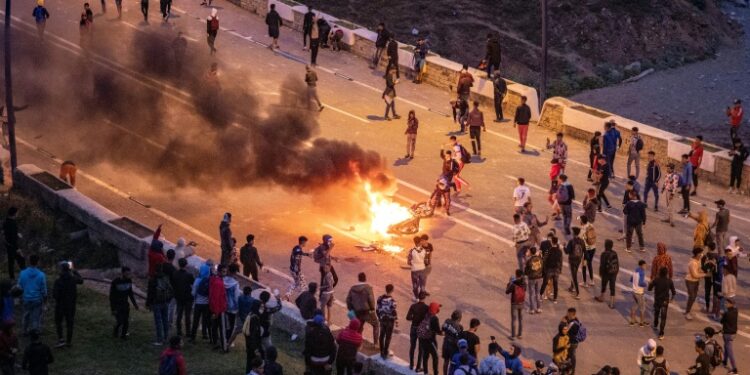 Spain accused Morocco of “blackmail” on Thursday for allowing a record 8,000 migrants to reach the Spanish North African enclave of Ceuta, sparking a crisis that saw clashes on the Moroccan side of the border overnight.

Spanish authorities were caught by surprise on Monday when large numbers of mostly young people began swimming or using small inflatable boats to cross the frontier as the Moroccan border forces looked the other way, quickly leaving the tiny territory overwhelmed.

Spanish authorities said police discovered the body of a male migrant floating in the water off Ceuta beach on Thursday, the second such drowning this week.

However calm had seemingly returned to Ceuta  on Thursday after Madrid moved quickly to deploy reinforcements and send most of the migrants back to Morocco.

And after a restless night, streets were deserted in the nearby Moroccan border town of Fnideq, where thousands had gathered earlier in the week to try to cross to Spain,.

Moroccan authorities had chartered buses to return people to different cities in Morocco where they had come from, with sources telling AFP around 3,000 had been transported away by late Thursday.

A police sources told AFP: “Spain and Morocco have reached an agreement officializing what is happening in practice and since last night adults who entered Ceuta are being returned in groups”.

On Wednesday night hundreds of Moroccan youths had thrown stones at Moroccan forces guarding the border, forcing them to retreat.

The youths also set fire to a motorcycle. The clashes broke out when police tried to break up the crowd.

The dispute between Spain and Morocco comes during heightened tensions over Madrid’s decision to provide medical treatment for the ailing leader of the Western Sahara independence movement, who has Covid-19.

Analysts said Morocco had sought to put diplomatic pressure on Spain to recognize its sovereignty over Western Sahara, a former Spanish colony mainly under Moroccan control.

Moroccan Foreign Minister Nasser Bourita confirmed that, telling the official MAP news agency “the true source of the crisis is the welcome Madrid gave to the Polisario separatist militia leader under a false identity”.

No future here
Spanish Defence Minister Margarita Robles said Morocco’s actions were “an aggression of Spanish borders and of the borders of the European Union”.

“We are not talking about youths aged 16, 17, (but rather) children as young as seven or eight were allowed through according to NGOs… ignoring international law,” she told Spanish public radio.

“Call it what you want but I call it blackmail,” she said.

“It is not acceptable to put the lives of minors or of people of one’s own country at risk.”

Madrid said 6,000 of the roughly 8,000 migrants had already been sent back. Anyone who reached Ceuta’s beach was being immediately returned.

Many of the returned migrants said they hoped to get into Ceuta again if border controls were eased once more.

“I have no future here, I want to work to help my family,” 17-year-old Mohamed told AFP in Fnideq after being returned.

By Thursday afternoon life in Ceuta — an enclave of 84,000 inhabitants which is connected to mainland Spain by ferry services across the Strait of Gibraltar — appeared to have returned to normal.

Shops and bars were open and people went about their daily life, although the occasional police helicopter flew overhead and pockets of newly-arrived youngsters could be seen roaming the streets.

Used as pawns
Many youths appeared to have gravitated to a central park where scores of young men were hanging around in groups, occasionally breaking into football-style chants of “Ole, ole, ole — Espana!”.

Ceuta and Spain’s other North African enclave Melilla have the European Union’s only land borders with Africa and have long been a magnet for migrants seeking a better life in Europe.

Madrid has received EU support, with European Commission vice president Margaritis Schinas warning that Europe “won’t let itself be intimidated by anyone on the issue of migration” in a veiled allusion to Morocco.

Rabat responded with a flurry of angry dispatches through the MAP news agency, saying “Morocco is a sovereign country” and “is not the police of Europe”.

Several NGOs have expressed concern over the huge number of minors who have crossed into Ceuta from Morocco — and the fact that Madrid is sending them back.

“Asylum seekers and migrants are being used as pawns in a political game between Morocco and Spain,” Amnesty said.

It estimated that “around 2,000 unaccompanied children” had entered Ceuta this week from Morocco.

The Spanish government meanwhile said around 1,500 minors have entered Ceuta since Monday, and that as of Thursday around 800 were still there. It said many had returned to Morocco “voluntarily”.

Nakuru Governor Lee Kinyanjui: It's time for Jubilee party to change after string of defeats