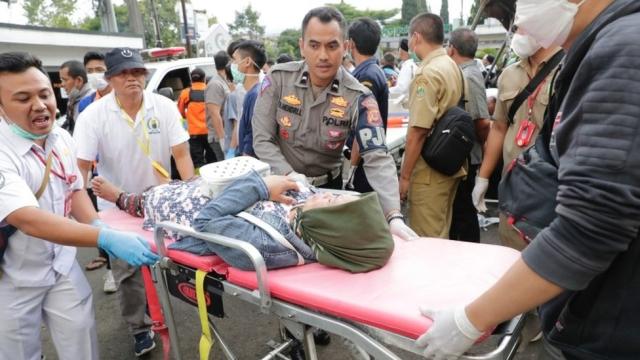 Injured people being transported to the hospital Photo Courtesy

An earthquake has struck the main Indonesian island of Java, leaving more than 40 people dead and hundreds injured.

According to local officials, the tremor could be felt in the capital Jakarta about 100km away, where people in high-rise buildings were evacuated.

The US Geological Survey data highlighted that the 5.6 magnitude quake struck Cianjur town in West Java, at a shallow depth of 10km.

Herman Suherman, the head of administration in Cianjur town told Kompas Tv the many got injuries from being trapped in debris from buildings.

“Victims kept coming from many areas. Around 700 people were injured,”

“The ambulances keep on coming from the villages to the hospital,”

“There are many families in villages that have not been evacuated.” Said Herman.

The area where the quake struck is densely populated and prone to landslides, with poorly built houses. Rescuers have been trying to evacuate people from collapsed buildings, and managed to save a woman and her baby, according to local reports.

“I was working when the floor under me was shaking. I could feel the tremor clearly. I tried to do nothing to process what it was, but it became even stronger and lasted for some time,” lawyer Mayadita Waluyo told the AFP news agency.

Earthquakes are common in Indonesia which sits on the “ring of fire” area of tectonic activity in the Pacific.