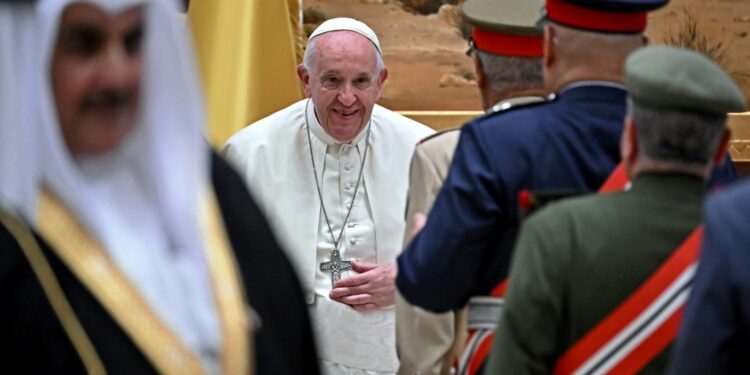 Pope Francis warned in Bahrain on Friday that “opposing blocs” and global divisions have put humanity on a “delicate precipice”, a veiled reference to the Ukraine war.

May we never allow opportunities for encounter between civilizations, religions and cultures to evaporate. Let us never permit the roots of our humanity to dry up! Let us work together! Let us work for togetherness, for hope! #ApostolicJourney #Bahrain

“We are living at a time when humanity, connected as never before, appears much more divided than united,” he said during a speech to religious leaders in the Gulf kingdom.

“We continue to find ourselves on the brink of a delicate precipice and we do not want to fall.”

Francis, who has made religious dialogue a pillar of his papacy, was speaking on the first full day of his trip to the tiny island state, where he arrived on Thursday afternoon.

His visit comes with the Ukraine war in its ninth month, and tensions growing on the Korean Peninsula.

In his speech on Friday, Francis warned that “a few potentates are caught up in a resolute struggle for partisan interests, reviving obsolete rhetoric, redesigning spheres of influence and opposing blocs.”

“Instead of cultivating our surroundings, we are playing instead with fire, missiles and bombs, weapons that bring sorrow and death, covering our common home with ashes and hatred,” he said.

Tayeb warned that “market economics, monopolisation of resources, greed and arms sales to the Third World” were “manufacturing victims of war”.

Secretary of State Cardinal Pietro Parolin, who met Russia’s Foreign Minister Sergei Lavrov in September, told journalists that there had been “a few small signs” of progress in negotiations with Moscow.

“All peace initiatives are good. What’s important is that we carry them out together and that they’re not exploited for other goals,” he said.

The pontiff’s 39th international trip since taking office comes three years after he signed a Muslim-Christian manifesto for peace in the United Arab Emirates during the first papal visit to the Gulf region, where Islam was born.

The pope’s visit to Bahrain has been shadowed by accusations of rights abuses, particularly against Shiites in the Sunni-ruled kingdom, allegations Manama rejects.

On Thursday the pontiff criticised use of the death penalty and urged nations to respect human rights.