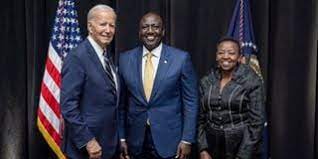 Ruto confirmed of their extensive talks and stated that the two countries would work together for the betterment of African as a whole.

“Kenya will continue expanding its strategic partnership with the United States of America to advance peace and prosperity in Africa,” said Ruto.

In his clarification on the photos going round on social media of Ruto, Rachel and Biden, the head of state said they were at a reception hosted by the USA president.

President Ruto the day before had delivered his inaugural speech before the United Nations General Assembly, where he heavily sold his bottom-up approach to economy, urging other leaders and lenders to provide additional liquidity for developing countries.

“I suggest that we have a golden opportunity to faithfully adhere to this motto by augmenting it, in word and indeed, with an additional “B”: Building Back Better, from the Bottom,” he said.

He stated that “building back better from the bottom upwards is, essentially, about including the marginalized working majority in the economic mainstream.”

President Biden had on Tuesday mentioned of his government adopting the bottom up and middle out approach.

“I am sick and tired of trickle-down economics. It has never worked. We’re building an economy from the bottom up and middle out,” Biden said.