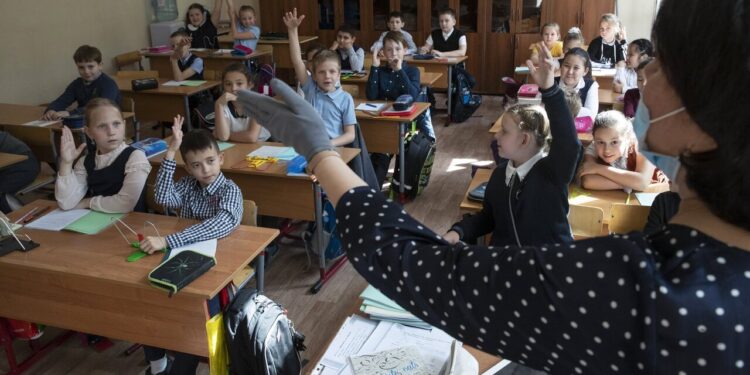 According to Britain’s Defense Ministry in its daily intelligence update on Ukraine, the training included “contingencies for a chemical or nuclear attack, first aid and experience handling and firing Kalashnikov rifles.”

The report further stated that the initiative is to help improve the quality of conscripts.

“Russian officials attempted to revive this training in 2014 following Russia’s invasion of Crimea. It was hoped that the initiative would improve the quality of conscripts. Eight years later, little has changed, and the quality of Russian conscripts remains poor, with low morale and limited training.”

“This training likely intends to prepare students with military skills as they approach conscription age and to increase the take-up for mobilization and conscription drives,” the report said. “This initiative is also likely to be part of a wider project to instill an ideology of patriotism and trust in public institutions in the Russian population.” the report read in part.

As the Russian forces withdrew from Kherson, Zelenskyy said, they destroyed critical infrastructure there, including communications, the water supply, and plants supplying heat and electricity.

“Almost 2,000 explosive items have already been removed from the areas but there is a lot more to be done,” he said.

Ukrainian president however cautioned vigilance saying that brutal battles are being fought every day.

Russia says it wants unhindered access to markets for its own food and fertilizer exports as part any renewal of the grain initiative that allows Ukraine to export grain from Black Sea ports.