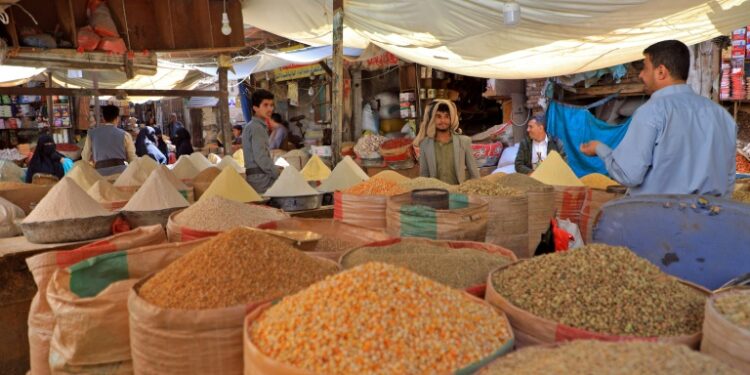 The war has spurred fears of a global hunger crisis, especially across the Middle East and Africa | AFP

World food prices hit an all-time high in March following Russia’s invasion of agricultural powerhouse Ukraine, a UN agency said on Friday, adding to concerns about the risk of hunger around the world.

The disruption in export flows resulting from the February 24 invasion and international sanctions against Russia has spurred fears of a global hunger crisis, especially across the Middle East and Africa, where the knock-on effects are already playing out.

Russia and Ukraine, whose vast grain-growing regions are among the world’s main breadbaskets, account for a huge share of the globe’s exports in several major commodities, including wheat, vegetable oil and corn.

Ukrainian ports have been blocked by a Russian blockade and there is concern about this year’s harvest as the war rages on during the spring sowing season.

“World food commodity prices made a significant leap in March to reach their highest levels ever, as war in the Black Sea region spread shocks through markets for staple grains and vegetable oils,” the Food and Agriculture Organization said in a statement.

The FAO’s food price index, which had already reported a record in February, surged by 12.6 percent last month, “making a giant leap to a new highest level since its inception in 1990”, the UN agency said.

The index, a measure of the monthly change in international prices of a basket of food commodities, averaged 159.3 points in March.

Russia and Ukraine together accounted for around 30 percent and 20 percent of global wheat and maize exports respectively, over the past three years, the FAO said

Wheat prices rose by almost 20 percent, with the problem exacerbated by concerns over crop conditions in the United States, the organization said.

The FAO’s vegetable oil price index surged by 23.2 percent, driven by higher quotations for sunflower seed oil, of which Ukraine is the world’s leading exporter.

Spanish supermarkets have rationed the sale of sunflower oil to stop customers stockpiling over shortage fears due to the war.

France has warned that the war has increased the risk of famine around the world.

The FAO estimates famine in West Africa and the Sahel regions, both highly dependent on Russian and Ukrainian grains, could worsen and affect over 38 million people by June if no measures are taken.

Ukraine on Thursday called on the European Union to provide aid to its farmers. The European Commission has been asked to coordinate the delivery of fuel, seeds, fertilizers and agricultural machines to the country.

For his part, Putin warned on Tuesday that, against the backdrop of global food shortages, Russia would “have to be prudent with supplies abroad and carefully monitor such exports to countries that are clearly hostile towards us”.

FAO chief Qu Dongyu called Friday on countries not to restrict food exports, which would only worsen the situation for countries dependent imports.

“Above all, we must not shut down our global trade system, and exports should not be restricted or taxed,” he said.

The FAO also called for aid to vulnerable nations to boost planting.

“One and a half billion dollars would be sufficient for immediate agricultural assistance that would save the lives of some 50 million people by allowing the growing of food where the need is most keen,” said Rein Paulsen, head of the agency’s emergencies office, in a letter to AFP.

The conflict has also sent oil and gas prices through the roof, causing inflation to rise further across the world and raising concerns that it could derail global economic growth.

Who's behind Nigeria's high-profile train attack?