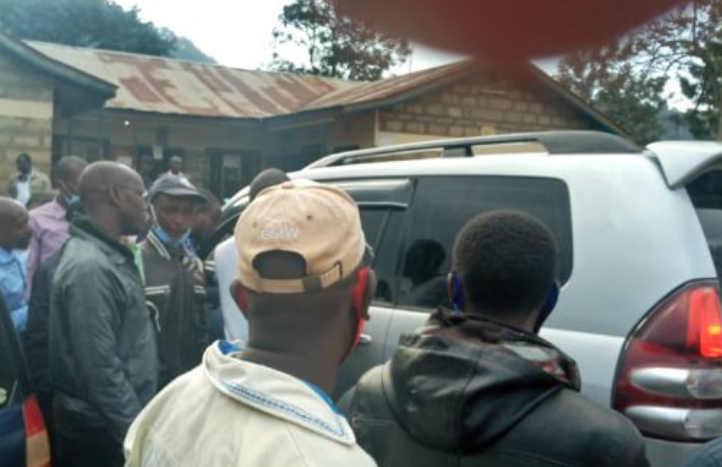 An irate crowd on Friday attacked Igembe South Member of Parliament John Mwirigi at the Assistant County Commissioner’s office after a brief altercation.

The MP sustained minor injuries after the crowd rained blows and stones on him. Police, however, managed to rescue him to safety.

The legislator’s feud with the residents began when he stood to address the meeting where a crowd booed, accusing the MP of gatecrashing CS Munya’s meeting.

John Kimathi who witnessed the fracas said MP Mwirigi attempted in vain to address the crowd after the meeting had ended.

“He wanted to address people after the meeting ended but tensions rose after a rowdy youth accused him of hijacking the meeting uninvited and that is when Mr. Paul lost temper and exchanged words with them and after a short time one attacked him forcing him to sustain slight injuries,” said Kimathi.

Kimathi said the MP seemed to have been irritated by the crowd’s hostility which made him lose temper and exchange bitter words with his opponents.

In the drama, the MP received several blows and stone injuries forcing the police to shoot in the air to disperse the irate crowd.

The police rescued the MP to his car and later escorted him to Maua Police Station where he recorded a statement.

As the MP was being beaten, CS Munya and his team had already left, and unknowingly, having left a high tension between the supporters of Mwirigi and Mithika Mzalendo who is allegedly eyeing the Igembe South seat.

The MP, however, later told the People Daily the chaos resulted from ‘leaders politicking’ development matters.

He also insisted that he had officially been invited into the meeting and the drama on Friday evening was unfortunate.

The area police boss Charles Onyango confirmed the incident and said he has commenced investigations.