Raila To Ruto: Resign From Government, Don’t Undermine It 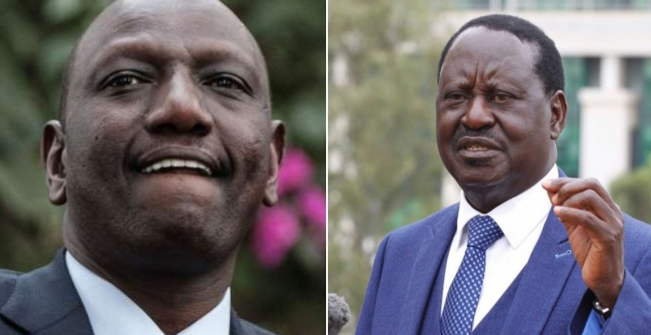 ODM leader Raila Odinga has openly challenged Deputy President William Ruto to resign if he is tired of working with President Kenyatta.

He hit out at the DP for opposing BBI, yet “he is campaigning two years before the election.”

“Hold your horses, wait for the report, and see whether it is a priority; the prophets of doom say it’s not a priority, but they run around campaigning for 2022. Is that a priority?” he said.

Raila said Ruto has been in the Government for eight years and campaigned on the promise of job creation but has resorted to “giving out wheelbarrows”.

While accusing Ruto of sabotaging the government from inside, Odinga said the DP should be bold enough to step down like his late father Jaramogi Oginga Odinga did in 1966.

Jaramogi quit as the vice president when he disagreed with Kenya’s first President the late Mzee Jomo Kenyatta.

“When Jaramogi disagreed with Kenyatta on the issues of land he wrote a letter that said he found it no longer tenable to remain in government and he resigned. He had the courage and decency to say I am stepping aside because I don’t want to earn a salary and I’m doing nothing. So, if you have a problem with your boss, take a walk! Get out of it!” Mr. Odinga said.

Odinga spoke on Saturday at his rural home in Siaya County, where he hosted a delegation of leaders and elders from the Mount Kenya region.

Christian Extremism x Trump: The Church in Bed with the State