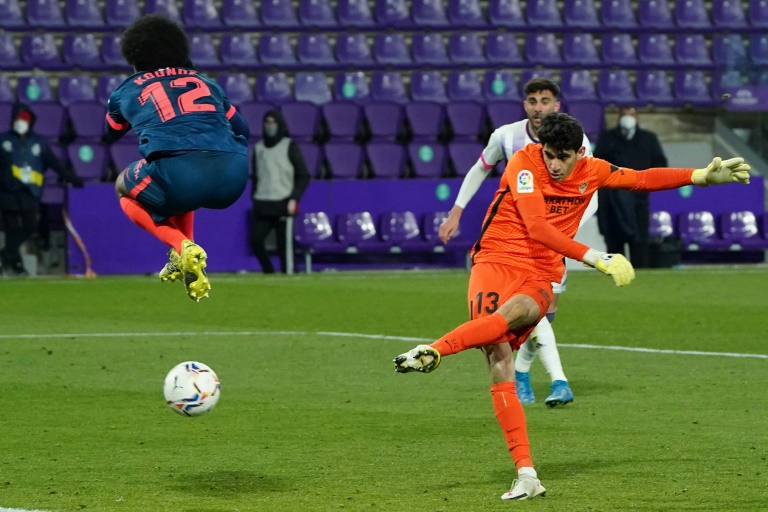 Moroccan Yassine ‘Bono’ Bounou became the first Sevilla goalkeeper to score in La Liga with his stoppage-time goal salvaging a 1-1 draw against Real Valladolid at the weekend.

The international ran to the opposition penalty area when his club were awarded a corner and slammed a left-foot shot into the net after a scramble.

Nigerian Kelechi Iheanacho was another African to star, raising his goal tally to nine from nine matches in all competitions with a double strike as Leicester City beat Manchester United 3-1 in an FA Cup quarter-final tie.

Here, AFP Sport rounds up the performances of Africans in the major European leagues:

His double helped Leicester reach the FA Cup semi-finals for the first time since 1982. Iheanacho intercepted Fred’s back pass in the 24th minute, rounded goalkeeper Dean Henderson and slotted home. He netted again in the 78th minute with a close-range header after a free-kick.

Ziyech rounded off arguably his best week at Chelsea since he joined from by coming off the bench to seal the Blues’ place in the last four with a 2-0 win over Sheffield United. The Moroccan scored as Chelsea beat Atletico Madrid to move into the Champions League quarter-finals in midweek, and drilled home just his fourth Chelsea goal since joining from Ajax on his favoured left foot in stoppage time.

Mali winger Djenepo scored just the second goal of his injury-disrupted season with a calm low finish to open the floodgates for Southampton in a 3-0 win at Bournemouth. One win in 12 games has seen the Saints tumble down the Premier League table, but they have been a different team in the FA Cup.

Bono is the second goalkeeper after Eibar’s Marko Dmitrovic to score in the Spanish top flight this season. “It was the last play of the game and it gives us a taste of happiness,” Sevilla coach Julen Lopetegui said. “A goal from a goalkeeper is not normal.”

Koulibaly put teammate Dries Mertens on the way to completing a brace in a 2-0 win over Roma, the Senegalese defender launching a counter-attack which resulted in the Belgian heading into the net after 34 minutes for an important win over rivals for a Champions League place.

Ivorian Kessie played a role in Hakan Calhanoglu’s winner for Milan in a 3-2 success over Fiorentina. Kessie brought the ball forward and poked it through for the Turkish midfielder to finish off the move.

Nigerian Simy brought his tally to six goals in four games with his side’s second, from the penalty spot, in a 3-2 defeat to Bologna. The 28-year-old has scored 13 goals in this campaign, including six from spot kicks, for the basement club.

The Democratic Republic of Congo winger’s successful season came to a premature end when he tore a right knee ligament during a 4-0 defeat to Bundesliga leaders Bayern Munich. The 21-year-old had been in brilliant form for promoted Stuttgart with 11 goals and four assists.

The Togolese’s seventh goal of the season was not enough to prevent Hoffenheim from losing 2-1 to relegation-threatened Mainz. Bebou cancelled out Robert Glatzel’s early opener in the 39th minute, but Mainz regained the lead two minutes later.

The Senegal striker ended a 10-game goal drought as he scored the only goal for Reims in a 1-0 win at Ligue 1 bottom side Dijon. It was his 13th league goal of the campaign, a tally bettered only by Kylian Mbappe of Paris Saint-Germain and Lyon’s Memphis Depay.

Kone is another Senegalese striker to have ended in Ligue 1 after plying his trade at a string of clubs. After starting out in Europe with FC Zurich, he moved to Nimes last year from German side Dynamo Dresden. Kone promptly scored on his debut for his new club but then netted just one more goal before bursting into life with three more strikes in his team’s last four games. He got the opener on Sunday as struggling Nimes claimed a shock 2-1 win at Lille, who had been top of the table.

DP Ruto Casts Vote In Sugoi As Voting Kicks Off