by Walter Kinyua
in Basketball, Sports
0 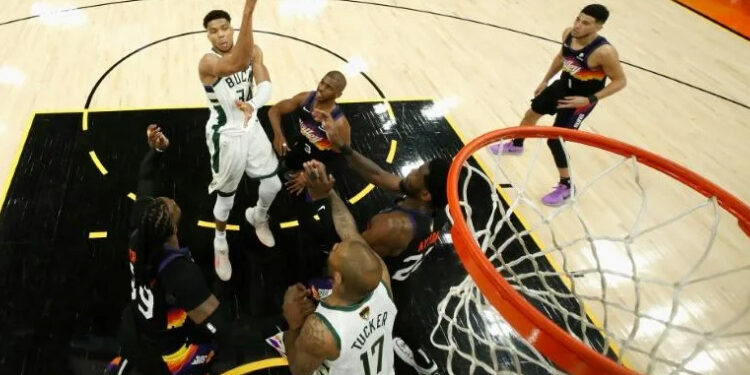 Giannis Antetokounmpo and the Milwaukee Bucks worked on defensive adjustments Wednesday to try and contain Phoenix Suns sharpshooter Chris Paul and pull themselves level in the NBA Finals.

Paul scorched the Bucks for 32 points and passed off nine assists to power host Phoenix’s 118-105 victory in Tuesday’s opener of the best-of-seven championship series.

The Bucks must find a way to frustrate the 36-year-old backcourt maestro, playing in the first NBA Finals of his 16-year career, to have any chance of capturing their first NBA title in 50 years.

“We have a lot we can learn from, and we can get better,” said Milwaukee’s Brook Lopez, who struggled the most when matched up defensively on Paul.

“We’re going to look at different coverages and our rotation, so we have a lot of different options to throw out there in game two.”

Paul used the pick and roll to set up mismatches and mid-range shots as well as passes to Deandre Ayton and Devin Booker in thwarting Milwaukee’s defense.

“We looked at film. You feel like there’s things you can get better,” Bucks coach Mike Budenholzer said. “He’s a player probably you’ve got to change up the looks.

“If he gets a rhythm, it’s not good for us. So, you got to have multiple looks and adjustments and be able to execute at a high level whatever you’re doing.”

One problem for the Bucks is that Paul has seen almost everything a foe can throw at him defensively over 16 NBA seasons.

“There’s only so many things that you can do out here on this court,” Paul said Wednesday.

“So, we adjust. If they trap, they trap. They switch, they switch. All season long we’ve adjusted and prepared for whatever a team has thrown us.”

“To win the first game at home was great for us, but we also have the mentality that we’re not satisfied,” Williams said.

“We’ve been in this situation before. We talked about it. We’ve already started to prepare ourselves for the best Milwaukee effort we’re going to see in the series. We’re ready for that.”

The Suns have had poor showings after some big playoff wins, notably a game five loss to the Los Angeles Clippers in the Western Conference finals.

“We felt like we didn’t play with the juice and desperation we typically play with,” Williams said. “Our guys understand that’s who we are, and we have to be, no matter what the situation is. That has been our DNA.”

Two-time NBA Most Valuable Player Antetokounmpo had 20 points and 17 rebounds in game one, making his comeback from a hyperextended left knee after missing two games.

“I was nervous. I was thinking about my knee,” the Greek star forward said. “Going into game two, hopefully I can feel more confident, more comfortable to go downhill and make more plays.”

He could play a role in denying Paul his desired shots as well.

“They can take the mismatch really well, which guy they want to attack, so it makes a little bit harder,” Antetokounmpo said. “So, we just got to make it as tough as possible.”

Milwaukee’s P.J. Tucker and Jrue Holiday had the most success on Paul, but the Suns playmaker still had the shots he wanted.

“They’re picking and choosing pick-and-rolls,” Tucker said. “As a team, we have to figure out how we want to handle a lot of those switches, especially guard on guard.”

“Chris is a difficult assignment for anybody with him playing at the level he’s playing at right now,” Crowder said. “Whatever you throw at him, he’s prepared for it.

“Game two, we’re just looking to come out and impose our will for 48 minutes as much possible, especially with the home crowd behind us.”

The Suns suffered a blow Wednesday when Croatian reserve forward Dario Saric was ruled out “indefinitely” with a torn right knee ligament. He contributed 4.8 points and 2.6 rebounds a game in the playoffs.

“Breaks your heart,” Williams said. “Hard worker. Unbelievable guy. And he was so looking forward to playing in these finals. He was shocked and felt pretty bad.”