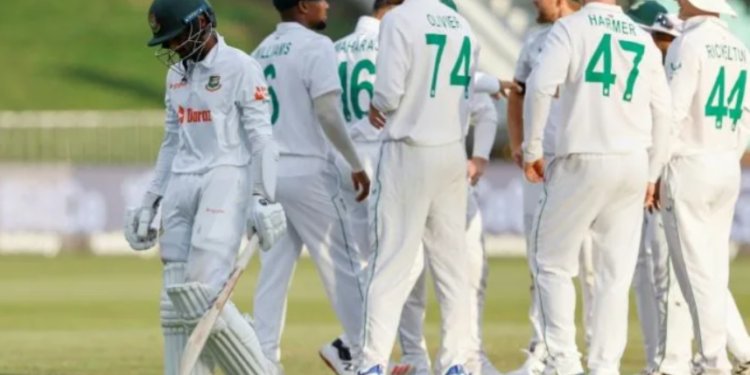 Quick exit: Bangladesh's Mahmudul Hasan walks back to the pavilion after his dismissal by South Africa's Keshav Maharaj | AFP/Marco Longari)

625
SHARES
4.5k
VIEWS
Share on FacebookShare on TwitterShare on WhatsApp

Bangladesh’s hopes of pulling off an historic first Test win against South Africa took a major blow when they made a horror start to their second innings at the end of the fourth day of the first Test at Kingsmead on Sunday.

Bangladesh bowled out South Africa for 204 in the second innings, leaving themselves a target of 274 to win.

However, Bangladesh team director, former Test captain Khaled Mahmud, said he was proud of his team for giving themselves a chance of victory.

In six previous Tests in South Africa, they have suffered five innings defeats and have never been in contention to beat the hosts.

“It can happen in cricket,” Mahmud said of the top-order collapse.

“There is still a possible chance, we have seven batsmen to go. If we bat well and bat long, we have a good chance to be in this Test match.”

“Whether we win or lose, I am very excited,” said Mahmud.

He added: “We have Mushfiqur and Shanto (Najmul Hossain) at the crease. Liton, Yasir and Miraj are left. We know the conditions are spinning. We are not giving up hope of winning yet.”

Off-spinner Harmer had Shadman Islam caught at slip for naught in the second over before left-armer Maharaj took two wickets in his third over.

Maharaj bowled first innings century-maker Mahmudul Hasan for four with a ball which drifted in and found a gap between bat and pad.

Bangladesh captain Mominul Haque edged two runs before he went back on his stumps and was trapped leg before wicket.

It could have been even worse. Najmul Hossain survived an appeal for a catch behind the wicket off Harmer when he had two.

Wicketkeeper Kyle Verreynne appealed, Najmul was given not out and South Africa did not seek a review. Replays showed a faint edge. Najmul finished on five not out.

The late afternoon collapse undid much of the good work Bangladesh had done with a superb bowling and fielding performance earlier in the day.

South Africa appeared to be in control of the match when they reached 105 for one at lunch in their second innings.

But Bangladesh came back strongly to bowl out the home side for 204.

Dean Elgar made 64, his second half-century of the match, and newcomer Ryan Rickelton was stranded on 39 not out when the last three wickets fell for two runs in seven balls.

Mehidy bowled with excellent control, as he had in the first innings, which enabled Mominul to use his fast bowlers in short spells.

Bangladesh took four wickets and conceded only 52 runs in 28 overs between lunch and tea.

“The ball is gripping, and it has turned more. Mehidy bowled very well, and their fast bowlers hit their lengths and made it tough for us from a scoring point of view,” said Sammons.

South African captain Elgar, who made 67 in the first innings, was dropped in the slips twice, on 34 off Mehidy Hasan and on 43 off Ebadot.

But Bangladesh made up for the errors with outstanding catches by Yasir Ali at slip and Shadman at silly mid-off, while substitute Nurul Hasan pulled off a direct hit run-out of Harmer with a throw from the cover boundary.