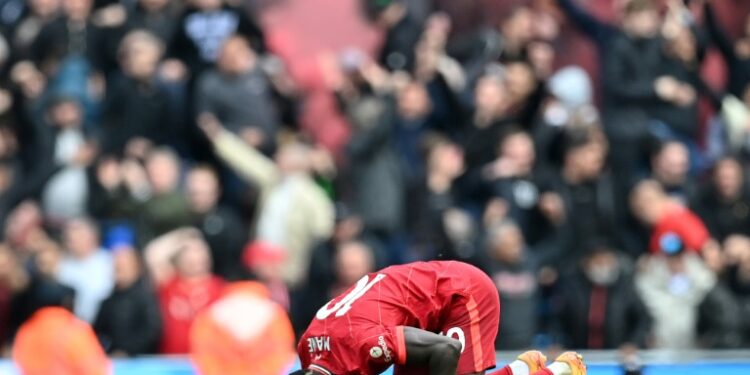 Egypt captain Salah played a sublime defense-splitting pass to Senegal talisman Mane, who celebrated his 30th birthday by equalizing with a brilliant finish into the corner for his 16th club goal this term.

City lead Liverpool by one point with seven rounds remaining, and the great rivals clash again this Saturday at Wembley in an FA Cup semi-final.

Mane kept Liverpool firmly in the Premier League title race as his second-half equalizer rescued a draw against Manchester City. With Liverpool trailing 2-1, Mane netted 47 seconds after the interval at the Etihad Stadium.

The Zambia midfielder scored the crucial second goal in a shock 2-1 win for Brighton at Arsenal. Mwepu struck in the 67th minute, firing home from the edge of the area after a neat interchange from Leandro Trossard and Moises Caicedo. It was the 24-year-old’s third goal this season and first since October in a campaign affected by injuries.

The Gabon captain and former African Footballer of the Year scored the first Barca goal in a dramatic 3-2 La Liga win at Levante. Second-placed Barcelona trailed, led and conceded an equaliser before winning the match in added time. “We improved in the second half, playing with more intensity,” said Aubameyang.

Not the weekend the Nigeria forward was hoping for, but a 12th goal of the season highlighted why so many of Europe’s biggest clubs are looking at him. In a tough battle with Fiorentina’s Igor Julio, the 23-year-old finally found some space to lash home with six minutes remaining. Unfortunately, Napoli were already 3-1 down and heading for a defeat which dented their hopes of a first Serie A title since 1990.

The Ivory Coast forward has been in good form for Sassuolo and his brace was enough to sink Atalanta in a fine 2-1 win. The 22-year-old gave the hosts the lead when he ended a lightning counterattack by crashing home a cross and made sure of the win on the hour with a smart run and lovely low finish to take his league tally this season to seven.

The Togo striker played out of position as a wing-back as Hoffenheim crashed to a 3-0 defeat at RB Leipzig. “I have played the position a few times this season. Obviously, I prefer playing up front, but I am always ready to help the team where needed,” said Bebou as Christopher Nkunku ran riot with a goal and assist for Leipzig.

The Mali international has proved a very shrewd January signing by Lorient, helping the club considerably in their fight to avoid the drop. Kone scored twice as Lorient came from two goals down to thump relegation rivals Saint-Etienne 6-2 and move four points clear of the bottom three. The 22-year-old has netted five times in nine outings despite starting just three games since his arrival.

His first league goal since November helped Bordeaux claim a vital three points in their bid to escape relegation. The Senegalese attacker got the second as Bordeaux came from behind to beat Metz 3-1 and climb off the foot of the table. They are now just two points from safety.