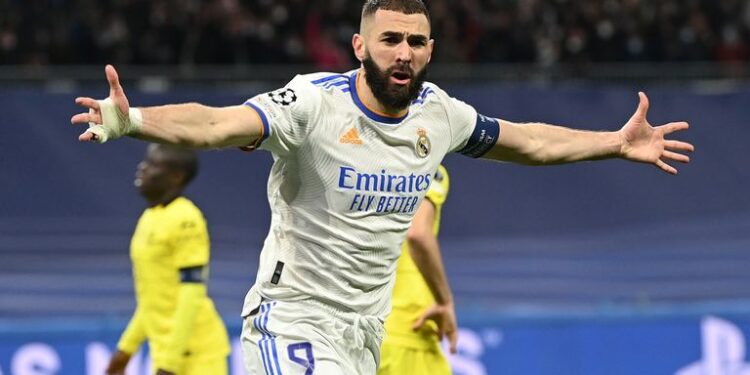 Karim Benzema stole the show once again as Real Madrid did just enough to eliminate Chelsea from the Champions League at the Santiago Bernabeu on Tuesday night with a 5-4 aggregate win in their quarterfinal tie.

Carlo Ancelotti’s side came into the match with the upper hand after riding a Benzema hat trick to a 3-1 win in the first leg at Stamford Bridge, and despite losing the second leg 3-2 to the Champions League holders, they advanced on aggregate.

“We suffered a lot,” Ancelotti said after the match. “We went 2-0 down without deserving it. With the first half we had, we created chances, we didn’t have the hunger to go and score because we didn’t need to, but for me 2-0 was undeserved. From there we dropped off a bit, and then the 3-0 liberated the team. I think after the 120 minutes we deserved it.

“The 3-0 liberated us, from there the fans started to push, the magic of this stadium and this team came out again. We knew we had to suffer, it’s normal, Chelsea are still a great team.

“We have to be proud of what we’ve done, we played a very tough last 16 game against PSG, a very tough quarterfinal against Chelsea.”

Mason Mount put Chelsea ahead with 15 minutes played to give them hope of turning the tie around as the visitors dominated the first half. They went 2-0 up — levelling the aggregate score — after half-time when Antonio Rudiger headed in Mount’s corner.

Marcos Alonso had a goal disallowed by VAR for handball and Benzema hit the crossbar before Timo Werner beat Thibaut Courtois to make it 3-0, putting Chelsea ahead 4-3 on aggregate.

Real Madrid came back to level matters soon after, when substitute Rodrygo beat Edouard Mendy from an exquisite cross into the area from Luka Modric to force extra time.

“Another incredible night at the Bernabeu. The tie got very difficult, and another spectacular reaction from the team puts us in the semifinals,” Nacho told Movistar after the match. “The important thing is we’re in the next round.

“We have a lot of things to improve, especially at the start of the game, but this is Real Madrid, we’re taught here to never give up. The DNA of this club is to fight until the end. Mission accomplished.

“We’re prepared to fight for everything, in the good and the bad moments, even if we hadn’t gone through, we fought until the end.”

The home side created the first chance of the match — Benzema putting a free kick over the bar after Vinicius Junior had been pulled down by Reece James — but it was Chelsea who looked more dangerous.

Kai Havertz had a shot deflected wide and Rudiger headed onto the roof of the net before Mount gave Chelsea the lead, cutting inside and sweeping the ball clinically past Courtois.

The home side looked to respond, and Benzema had a left-footed shot deflected off target, but Chelsea went in ahead and in control at the break.

The European champions increased their advantage in the 51st minute after Reece James’ shot was diverted wide and Rudiger scored with a towering header from the subsequent corner.

Benzema went close again, Mendy saving his free kick, before Chelsea thought they’d gone ahead in the tie when Alonso blasted past Courtois, only for the goal to be correctly ruled out for handball by VAR. Benzema headed against the crossbar, but it was Chelsea who scored next in the 75th minute through Werner, who dispatched a shot that Courtois could only parry over the line after the German’s mazy run through the area.

Chelsea looked to have completed a dramatic comeback before Rodrygo — introduced just two minutes earlier — fired Modric’s delivery past Mendy in the 80th minute to make it 4-4 on aggregate.

Nacho added: “At [Modric’s] age, every day he’s better. He’s an example not just for players, but for people in general. It’s like he’s the youngest in the team. Let’s hope he’s with us for many more years.”

Real Madrid were not the only LaLiga team to advance in the Champions League on Tuesday, Villarreal shocked Bayern Munich, earning a 1-1 draw at the Allianz Arena to win their tie with the German champions 2-1 on aggregate and reach the semifinals in Europe.

“We’re very happy for Villarreal,” Ancelotti said. “Madrid and Villarreal tonight have given a boost for Spanish football in Europe. People said the Spanish teams weren’t at the same level as the English and now there are two Spanish teams in the semifinals of the Champions League.”

“Raila Advised Me To Join Politics, Said He Was Retiring,” Wanjigi Claims