El Clasico: Barca Humiliate Real Madrid with a 4-0 Rout at The Santiago Bernabeu 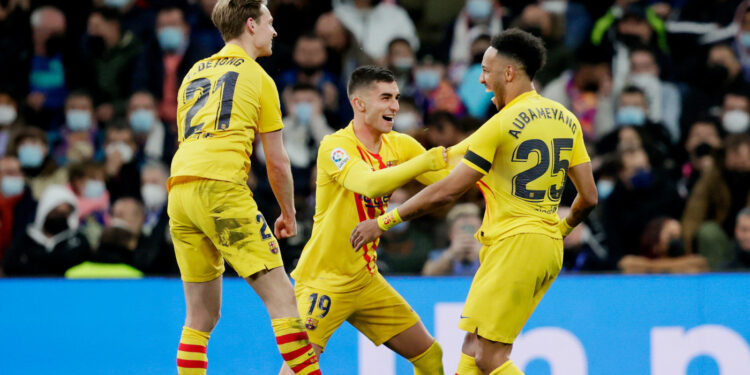 Football Club Barcelona continued their remarkable rebirth under new coach Xavi Hernandez, snapping a five-game losing streak against Real Madrid in emphatic fashion with a 4-0 victory over their fierce rivals in Sunday’s El Clasico at the Estadio Santiago Bernabeu.

One of the prime architects of their revival, former Arsenal taisman Pierre-Emerick Aubameyang netted twice, once in either half, sandwiching goals from Ronald Araujo or Ferran Torres. Ousmane Dembele, another player reborn since the start of the year, assisted both first-half goals as Barcelona ran rampant against a Madrid side badly missing the injured Karim Benzema and Ferland Mendy.

The victory, their first over Madrid since 2019, moves Barcelona back up to third place in LaLiga and now only behind second-placed Sevilla by three points, with a game in hand. Despite a chastening night in the Spanish capital, Real Madrid’s lead atop the standings remains a healthy nine points after Sevilla could only draw with Real Sociedad earlier in the day.

With the Madridistas looking disjointed playing without a lethal striker, the culers were in the ascendency from almost the first whistle and could have been ahead before Aubameyang scored the 29th minute opener.

Ousmane Dembele torched Nacho, in for the injured Mendy, down the right and whipped in a fine cross that Aubameyang met in between beleaguered Madrid centre-backs Eder Militao and David Alaba to glance a header inside the far post.

The goal made it five games in a row against Madrid that Aubameyang had found the net, including the four he scored in with Borussia Dortmund.

Dembele supplied the assist again nine minutes later as Barcelona doubled their lead. This time his delivery came from a corner, with Araujo the one to take advantage of some slack Madrid marking to head past Thibaut Courtois. No player in Europe’s top five leagues now has more assists in 2022 than Dembele’s seven.

Madrid had a glorious chance to level the game up just before that, but Vinicius Junior lost his footing as he tried to go around Barcelona goalkeeper Marc-Andre ter Stegen and then appealed in vain for a penalty.

Within two minutes of the start of the second half, the game was effectively over as a contest. Despite a double half-time substitution from Ancelotti, Barcelona picked up right where they left off. Moments after fluffing a glorious chance, Torres made it 3-0 with a cool finish into the top corner after Aubameyang found him with a neat flick following more hapless Madrid defending

There was an element of controversy as Aubameyang got his brace four minutes later. Madrid defenders had stopped playing before the former Arsenal forward chipped the ball over Courtois and into the back of the net after seeing a raised flag from the assistant referee. But with the whistle not blown and replays showing no offside, the goal was given after a VAR review.

The scoreline could have been even more emphatic but that will be of little concern on a day that continued to suggest a bright future awaits under Xavi. The win is Barcelona’s fifth in a row in LaLiga and means they are now unbeaten in thirteen games in all competitions.

Five Years On, How #MeToo Shook the World

Karua Pleads With Kenyans To Turn Out And Vote