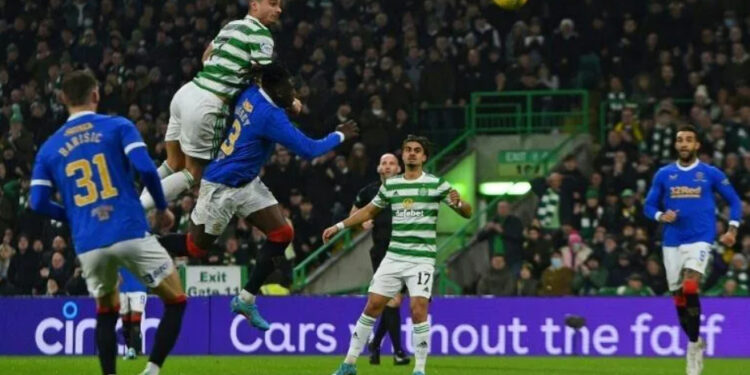 987
SHARES
4.5k
VIEWS
Share on FacebookShare on TwitterShare on WhatsApp

Giorgos Giakoumakis scored his second hat-trick in five games as Celtic moved six points clear at the top of the Scottish Premiership with a 4-0 thrashing of 10-man Ross County on Saturday.

The Hoops had the points wrapped up within 26 minutes as Giakoumakis headed home Jota’s cross at the far post, thrashed home his second from close range and then nodded down for Daizen Maeda to make it 3-0.

“We started the game really well and our football was good,” said Celtic manager Ange Postecoglou.

An uphill task for County was made impossible when Kayne Ramsay was shown a straight red card from a lunge on Tom Rogic on 28 minutes.

At that stage Celtic would have expected to add many more goals to their significant goal difference advantage over Rangers, which could prove vital with two Old Firm clashes to come in the final seven league games of the season.

However, there was just one more in the second half as Giakoumakis completed his hat-trick from the penalty spot.

The Greek international had a troubled start to his Celtic career due to injury, but now has 11 goals in his last 13 appearances.

“The rewards are there for you as a striker with the way we play but the big thing is working hard when we don’t have the ball,” added Postecoglou.

“He’s done well and has taken his goals really well, but he benefits from everyone else, and he knows that.”

Europa League quarter-finalists Rangers can cut the gap at the top back to three points when they travel to bottom-of-the-table Dundee on Sunday.

Dundee will also be desperate for the points after Callum Hendry’s double in a 2-1 win for St Johnstone over Motherwell opened up a four-point gap at the foot of the table.

In the battle to make it into the top six for the end-of-season split, Dundee United were the big winners as a 96th-minute strike from Mark McNulty beat St Mirren 2-1 to move Tam Court’s side up to fourth.

Aberdeen also remain in the hunt for a top-six finish after coming from behind to beat Hibernian 3-1 thanks to two Lewis Ferguson penalties.

Hearts now have a 14-point advantage in third place after they beat Livingston 2-0 at Tynecastle.

Kisii: NEMA Warns Against Use of Plastic Bags