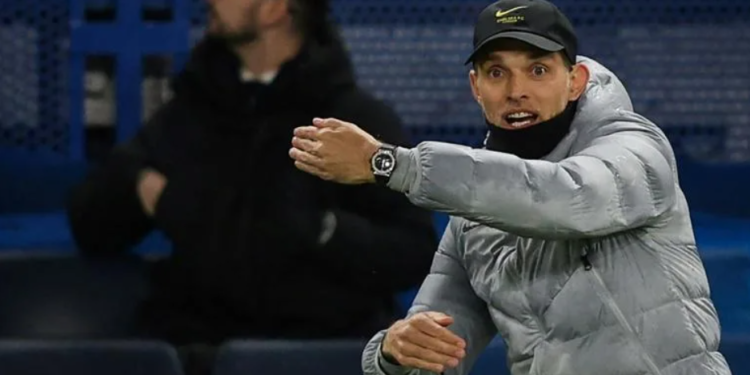 987
SHARES
6.8k
VIEWS
Share on FacebookShare on TwitterShare on WhatsApp

Thomas Tuchel turned on Chelsea’s players as the Blues boss let his frustration pour out after their dismal 3-1 defeat against Real Madrid in the Champions League quarter-final first leg.

Tuchel’s side are facing the end of their reign as Champions League holders following a bitter night at Stamford Bridge on Wednesday.

Asked if the tie was still winnable, Tuchel replied: “No. Not at the moment, no.

“Because we have to find our level back, I don’t know where it is since the international break.

“If things change, maybe, but how many clubs in worldwide football could do what we need, three goals difference? How often does this happen?”

The spluttering performance was completely unrecognizable from Chelsea’s dynamic run to the Champions League title last season and, more recently, their six-game winning streak before the March international break.

Coming just five days after a humiliating 4-1 home defeat against Brentford in the Premier League — the first time they had lost to their west London neighbors since 1939 — the capitulation against Real was too much for Tuchel to take.

He barely had time to sit down for his post-match press conference before he let rip at his players.

“It was one of the worst first halves that I saw from us here at Stamford Bridge. It’s very disappointing,” he said.

“We lost shape and sharpness. I don’t really have an explanation. Before the international break we had a long winning streak and were very competitive.

“We can speak about the same defensive performance from five days ago. It is seven goals conceded. It’s alarming. Nothing has changed in our approach.”

It was especially notable that Tuchel was so willing to publicly lambast his stars because he rarely shows displeasure with them in his media briefings.

Having led Chelsea to European and Club World Cup glory in his first year in charge, Tuchel is facing the first real on-pitch crisis of his reign.

He was adamant that the on-going sale of Chelsea, forced by the British government’s sanctions of the club’s Russian owner Roman Abramovich following the invasion of Ukraine, was not a distraction, or at least not one that he was willing to accept as an excuse from his players.

“I don’t think there’s a deeper reason for it,” he said. “We were so far off our level of everything the game demands, tactically, shape, stiffness, in challenges.”

Tuchel took responsibility for the tactical set-up that allowed Benzema and Vinicius Junior to terrorise Andreas Christensen on the right side of Chelsea’s defence.

“It’s on all of us, I’m included in this. For the situation on the flank with Christensen, it was my mistake,” he said.

“I don’t have really an explanation because we have fallen from being very competitive.”

Nothing encapsulated Chelsea’s night to forget better than the late chance missed by Romelu Lukaku, whose woeful header underlined why Tuchel had preferred to start with Kai Havertz.

Havertz had scored before half-time with a clinical header, giving them hope before Mendy and Antonio Rudiger combined to gift Benzema the third goal.

Worryingly for Tuchel, even Chelsea’s place in the Premier League’s top four is far from certain if they carry on in their current form.

“I worry more about Southampton on Saturday than Real Madrid on Tuesday,” Tuchel said.

“If we don’t get our heads and legs straight and our mentality right, we will not win. And then this tie is not alive.”

‘Army of Orphans’: The Price of South Africa’s AIDS Scourge