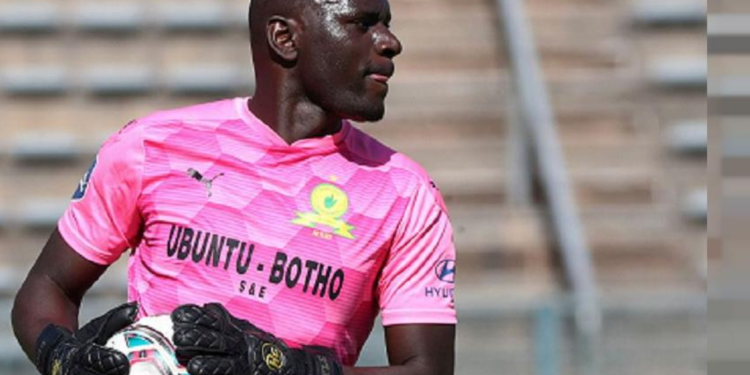 “After much consideration, my family, managers and I, decided it was in my best interest to hang my gloves on my beloved Cranes,”

It is with a heavy heart that I am announcing my retirement from international football. After much consideration, my family, managers and I, decided it was in my best interest to hang my gloves on my beloved Cranes 🇺🇬 Big thanks to every Ugandan over the years. pic.twitter.com/vH6CRK4USR

Uganda failed to qualify for next year’s AFCON finals in Cameroon after losing their last qualifying fixture against Malawi. The team scored just three goals in the entire campaign, drawing criticism from fans.

Just before the AFCON qualifiers wrapped, Uganda had had a disappointing show at the CHAN finals.

Onyango, who features for South Africa’s Mamelodi Sundowns has earned 83 international caps for the Cranes.

In 2016, he was named Africa-based Player of the Year by CAF.

“Thank you for everything Dennis Onyango”, a user named Silva said on Twitter.

The 35-year-old made his international debut for Uganda on June 18, 2005, during the 2006 World Cup qualifying match against Cape Verde. Uganda won the game 1-0.

He was named Cranes captain in April 2017 following the retirement of veteran striker Geoffrey Massa.

Onyango captained the Cranes to their 2017 Africa Cup of Nations in Gabon after 39 years, finishing the qualification campaign by conceding only two goals.

He was Uganda’s shot-stopper as the east African country qualified for its second consecutive AFCON finals in 2019.

Matatus Back To Nakuru CBD After A 2-Year Eviction