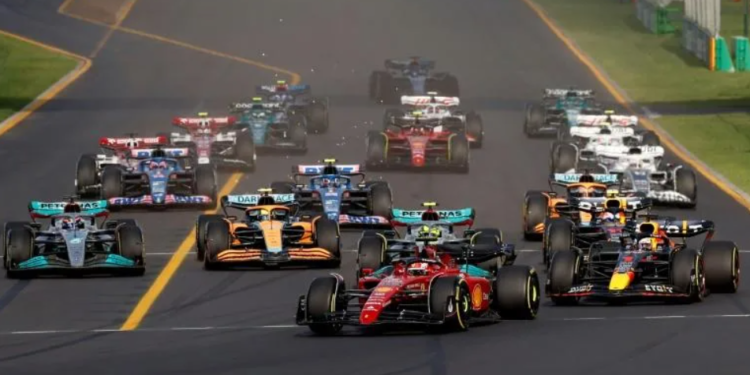 A flawless Charles Leclerc led from start to finish to steer his Ferrari to an action-packed win at the Australian Grand Prix on Sunday with world champion Max Verstappen failing to finish.

The world championship leader from Monaco started from pole, held his position at the first turn and never looked back, scorching round the 58-lap Albert Park circuit to take the chequered flag by a massive 20.5 seconds.

“It’s amazing, the car was incredible today. What a race and what a pace today,” said Leclerc after clocking a fourth career win and second of the season.

“Honestly, what a car today. I did a good job all weekend but it’s not possible without the car. I’m just so happy.

“Obviously, we have only had three races so it’s difficult to think of the championship, but we have a very strong car and a reliable car. It’s great to be back in this position,” he added.

The Mclarens of Lando Norris and Daniel Riccardo were fifth and sixth.

Alpine’s Esteban Ocon came seventh ahead of Valtteri Bottas in an Alfa Romeo, with Pierre Gasly’s AlphaTauri and Alex Albon’s Williams rounding out the top 10.

But there was disaster for Red Bull’s Verstappen, the winner two weeks ago in Saudi Arabia, who pulled over on lap 39 when second, saying on the team radio: “I smell some weird fluid.”

He jumped out with smoke coming from the engine, grabbing a fire extinguisher to help marshals put out the flames. It was his second retirement in three starts this season.

“These kinds of things, if you want to fight for the title, are unacceptable,” the Dutchman fumed. “We are so far behind (Ferrari).”

In contrast, Russell was delighted with his podium place after Mercedes’ early season struggles with porpoising — bouncing at high speed.

“We’ve got to be in it to win it and capitalize on others’ misfortune and obviously we got a little bit lucky today twice, but we’ll take it,” he said, referring to two safety cars.

Victory consolidated Leclerc’s championship lead after three rounds with the Ferrari ace, who also won the year’s opening grand prix in Bahrain, earning the extra point for the fastest lap to add to 25 for the race victory.

He now sits 71 points ahead of Russell on 37. Verstappen is sixth with only 25.

The Albert Park circuit was revamped this year for the first time since 1996, promising to be faster and with better overtaking opportunities and it delivered for the fans.

Starting on medium tires, Leclerc got a perfect getaway from his 11th pole in 83 grands prix starts and built a gap of 0.6 seconds on Verstappen after the opening lap.

Hamilton, who started fifth, was a big mover off the grid, powering into third at the first turn ahead of Perez and Norris.

But Sainz had a horrible day.

After starting ninth, he lost traction on lap two, and was lucky not to take out any rivals as he slid across the track and got stuck in the gravel forcing the first safety car.

After the restart, Leclerc and Verstappen increased their advantage over Hamilton before Perez grabbed third place back from the Briton on lap nine.

Leclerc stormed away to a 3.3-second lead over Verstappen by lap 12, lapping half a second faster than the Dutchman, who pitted on lap 19 and switched to hard tires.

Leclerc waited until lap 22 for his tire change, retaining the lead when he blasted back out 6.9 seconds in front of Verstappen.

The safety car was needed again on lap 24 when Vettel spun and crashed into a wall, leaving debris on the track to cap a horror weekend for the four-time world champion.

It enabled Russell to dive into the pits and emerge on fresh rubber ahead of Perez and Hamilton, who had already had their tire stops.

Ai is the Future: Exploring the Exciting Possibilities of Artificial Intelligence