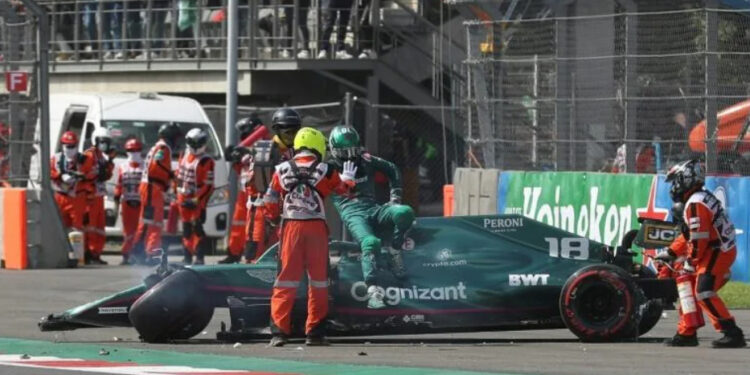 Wall marked: Aston Martin's Lance Stroll steps out of his car after crashing in the first session | AFP/EDGARD GARRIDO

Valtteri Bottas claimed pole position for the Mexico Grand Prix on Saturday with “shocked” world champion Lewis Hamilton next to him in a Mercedes front-row lockout.

Championship leader Max Verstappen, who has a 12-point edge over Hamilton in the title race with five events left, was third fastest.

The other Red Bull driver Sergio Perez was fourth in front of his home fans in Mexico City.

“Valtteri did an amazing job, he has been driving so well for the team. To lockout the front row is so special,” said Hamilton of his teammate who clocked 1min 15.875sec, the only driver to dip below 1:16.

“They (Red Bull) were six-tenths ahead at one stage but when we got to qualifying, we had better pace. I am as shocked as everyone.”

For Bottas, it was a career 19th pole position, bettering the 18 of Rene Arnoux as the driver on most poles without ever winning the world title.

“Honestly, that first run in Q3 was one of my best laps. It’s a good feeling,” said the Finn.

Verstappen admitted that there had been a problem with the balance on his Red Bull.

“It seemed like through qualifying the balance went away a little bit, but actually the last lap I was on for a good lap,” said the Dutchman.

“I don’t know what happened in front of me but there were two guys going off and I thought there was going to be a yellow flag, so I backed out and the lap of course was destroyed.

“Even with that and not having a great balance I think we could have still gone for that pole lap.”

“I’m a competitor at heart and I always find those kinds of decisions disappointing in a way, but sometimes they are necessary,” Wolff told reporters after qualifying.

Team orders
“We will first discuss it with Valtteri and Lewis because they are the ones it concerns and then we will see if the situation requires us to do so.”

AlphaTauri’s Pierre Gasly, Ferrari driver Carlos Sainz, Daniel Ricciardo in a McLaren, Charles Leclerc in the second Ferrari, Yuki Tsunoda of AlphaTauri and Lando Norris in a McLaren filled out the top 10 on Saturday.

The first qualifying session was marked by Lance Stroll burying his Aston Martin in the barriers at the spectacular Autodromo Hermanos Rodriguez.

The opener was red flagged to clear the debris.

On the resumption, Verstappen, a two-time winner in Mexico, roared away from the two Mercedes with a blistering 1:16.788.

Former two-time champion Fernando Alonso in the Alpine was the most high-profile driver to fail to make it to Q2.

Japan’s Tsunoda clocked an impressive 1:16.071 in the Alpha Tauri to be third fastest in the session at one stage.

However, he already knew he was starting Sunday’s race from the back of the grid, along with Stroll, for taking too many engine parts after both also changed engines this season.