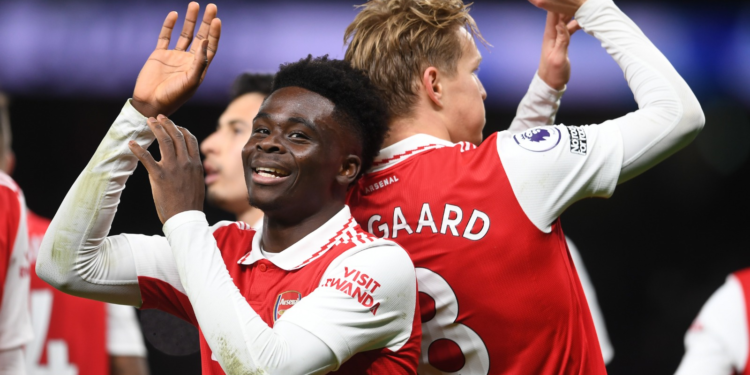 Arsenal extended their lead at the top of the Premier League to eight points as they beat Tottenham 2-0 in the north London derby at the Tottenham Hotspur Stadium on Sunday.

The league leaders burst into a commanding first half performance, profiting from a Hugo Lloris own goal before a stunning Martin Odegaard strike put daylight between the two sides. While Spurs recovered in the second half, their improved performance remained futile failing to score against Arsenal for the first time since 2017.

Spurs had a scare on seven minutes as Lloris took too long to clear his lines with Gabriel Martinelli expeditiously bearing down. Eddie Nketiah won the ball after a flick on from Martinelli but the striker could only fire against Lloris.

Antonio Conte’s side and Lloris in particular did not heed the warnings of their slow start and Arsenal took the lead on 14 minutes through an own goal by the France goalkeeper.

A long ball over the top by Thomas Partey found Bukayo Saka free on the left. The 21-year-old’s relatively tame cross deflected into the torso of the flailing Lloris and over the line.

Arsenal had not beaten their north London rivals away from home since 2015, but they were rampant in their first half display and inflicted wave-upon-wave of attacks on the hosts’ backline.

Partey was inches from doubling the lead for Mikel Arteta’s side in spectacular fashion as he lashed a volley from outside the area against the right post.

The visitors’ incessant pressure resulted in a second goal as Odegaard scored for the eighth time this season on 36 minutes in spectacular style.

Arsenal had the measure of Spurs in every department, and as Saka again found space on the right, he set the ball through to Odegaard in space in the centre, who took time before striking a low effort into the far corner from 20 yards.

Aaron Ramsdale was forced into a save by Harry Kane on the stroke of half-time as Spurs scrambled their second chance on goal.

Conte’s side have regularly been rescued by good second half performances this season and they were quick out of the blocks soon after half-time. Kane saw an effort well saved by Ramsdale before Ryan Sessegnon’s strike from a tight angle was also kept out.

But Spurs’ forward efforts remained without a finishing touch as Arsenal’s defence stood firm in keeping the hosts at bay despite a late spell of pressure.

Arsenal are top of the Premier League with 47 points from 18 matches, capitalising on Manchester City’s defeat at Manchester United on Saturday to extend their lead at the summit. Spurs remain fifth, now five points from the top four.