Ireland must Build on Springbok Victory and add Silverware: Sexton

by Linda Amiani
in Rugby, Sports
0 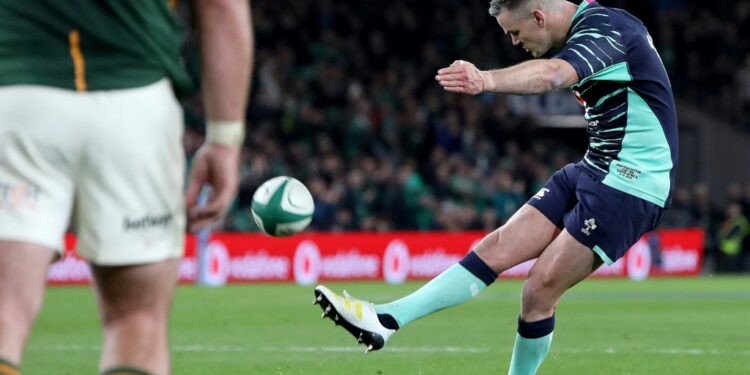 Ireland captain Johnny Sexton said beating world champions South Africa on Saturday was “right up there” with other memorable victories but said he wants trophies to round off his career.

The 37-year-old fly-half’s penalty late in the second-half gave the Irish just enough breathing space to hold on and beat the Springboks 19-16 in a raucous Lansdowne Road.

The victory for the number one ranked side in the world comes on the back of the historic series win in New Zealand in July.

However, pleased as he was at beating the Springboks — who if they had a specialist kicker might have come away with a win — the 2018 world player of the year is desperate to round off his Test career on a high next year with some form of silverware.

“It is obviously right up there,” said Sexton at the post match press conference.

“We did not play our best rugby but the very pleasing thing is maybe a couple of years ago we might have crumbled.

“We are building well but we want trophies. The Triple Crown last season was very pleasing but we are talking about a Six Nations Grand Slam and a World Cup.

“That is key as we have not done that yet and hopefully we are building towards that.”

Sexton was one of several players in the current team that won the Six Nations Grand Slam in 2018 under Andy Farrell’s predecessor as head coach, Joe Schmidt.

But the shine was gone a year later when Ireland bowed out of the World Cup at the quarter-final stage. They have a poor record at World Cups, never having even made a semi-final.

The next time South Africa and Ireland meet will be in next year’s edition in France in the pool stage but Farrell was not going to fall into the trap of reading too much into Saturday’s win.

“We are miles off it, there are so many things and permutations that can happen along the way,” said Farrell.

“South Africa are good for that, getting their timing right for a World Cup.

“It is a good start to the season, it was good to play them after five years and to see the pressure they throw at us.”

His South African counterpart Jacques Nienaber agreed that Saturday’s game would have no bearing on their crunch meeting next September at the Stade de France.

“There is no relevance,” he said. “I think in 2018 we lost 50 percent of our games and we still won the World Cup the following year.

“The theory that you are out of contention if you lose your first pool match at a World Cup or a Lions series is a myth.

“This defeat means you have to consolidate and try and build momentum again.”

Sexton and Farrell eulogised about how much character the Irish had shown in a “brutal Test match”.

So attritional was the first-half they lost three of their starting line-up, including scrum-half Conor Murray on his 100th appearance, which Sexton said was “very cruel for him”.

Centre Stuart McCloskey and prop Tadhg Furlong also staggered off with injury before the break.

“That is what we wanted, a different type of Test match. That was a proper old-fashioned slinging match.

“Wow. I thought the character of the side was immense for all sorts of reasons.”

Nienaber said Ireland “deserved their victory” but took solace at how close his side had come to denying the hosts a 10th successive home Test win.

“We will take learnings out of it,” he said.

“We have one week and then we play France. We have to learn quickly. Some things will take time, some won’t.”

Nienaber said the goalkicking had been costly. Damian Willemse, who is not a natural Test fly-half, had a nightmare and was replaced as kicker by Cheslin Kolbe.

“It is as it is,” said Nienaber. “None of our goalkickers go out there to miss. We did not nail our big ones but I would never blame a player for that.”

DPP Sends back KEMSA files to EACC for further Investigations