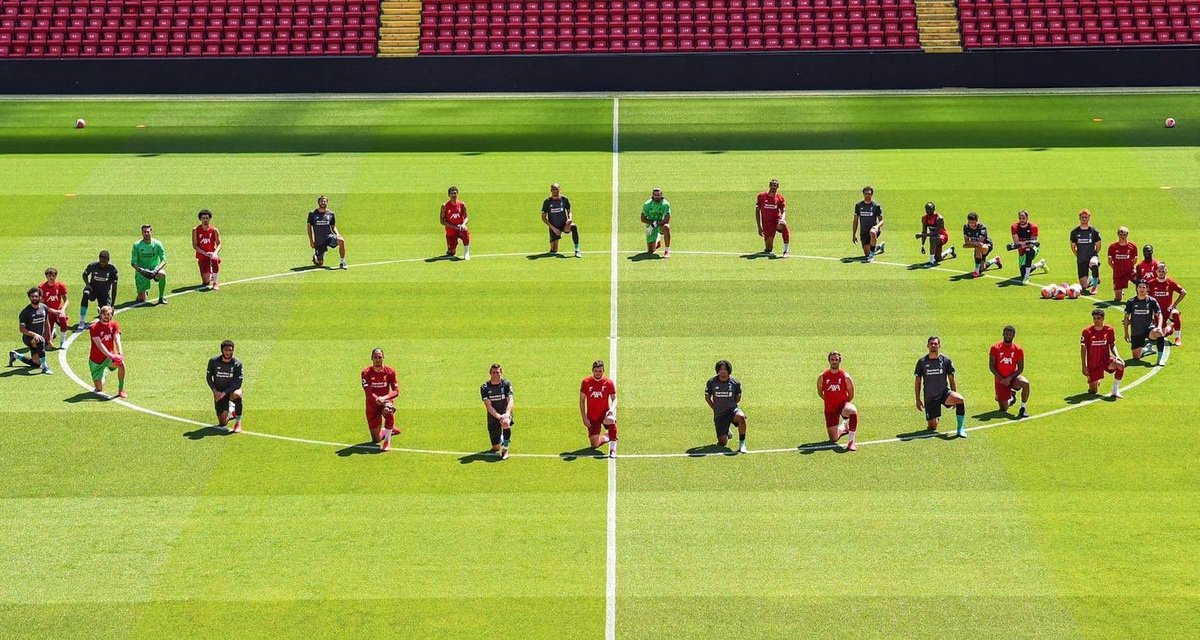 Liverpool players took a knee around the center circle at Anfield in a message of support following the death in police custody of African-American George Floyd in Minneapolis. The picture featuring 29 Reds players came with the caption “Unity is strength. #BlackLivesMatter”.

Players reportedly requested the picture during training on Monday.

Protests have been held after Floyd, an unarmed black man, died on 25 May after being restrained by white Minneapolis police officer Derek Chauvin, who kneeled on his neck for almost nine minutes to pin him down.

Chauvin has since been charged with his murder and sacked.

Former San Francisco 49ers quarterback Colin Kaepernick first protested against racial injustice and police brutality by kneeling down during the United States national anthem in the summer of 2016. Since then, that gesture has become symbolic to the Black Lives Matter movement.

Manchester United and England footballer Rashford said he had been “trying to process what is going on in the world”.

He added: “At a time I’ve been asking people to come together, work together and be united, we appear to be more divided than ever. People are hurting and people need answers. Black lives matter. Black culture matters. Black communities matter. We matter.”

British 200m world champion sprinter Dina Asher-Smith had tweeted on Thursday: “Racism, police brutality… all of this is something we all have to be vocal about. Irrespective of our race or nationality.

“RIP George Floyd. Heartbreaking and sickening to have to be saying RIP to another black person in these circumstances.”

We Have Had Enough

Basketball legend Michael Jordan says he is “deeply saddened, truly pained and plain angry”. “I see and feel everyone’s pain, outrage and frustration,” he added. “I stand with those calling out the ingrained racism and violence toward people of color in our country.”

“We have had enough.”

Vanessa Bryant, widow of basketball legend Kobe, shared an image of her late husband wearing an “I Can’t Breathe” T-shirt. “My husband wore this shirt years ago and yet here we are again,” she wrote. “Life is so fragile. Life is so unpredictable. Life is too short.”

#BLACKLIVESMATTER
To be completly honest, I felt out of place and uncomfortable sharing my thoughts on social media about the whole situation and this is why I haven’t express myself earlier than today.
And I was completely wrong. 1/3

“I’m one of the only people of color and yet I stand alone,” the Briton, 35, who is the only black F1 driver, wrote on Instagram. “I would have thought by now you would see why this happens and say something about it but you can’t stand alongside us.”

Leclerc said he had been “completely wrong” not to speak out previously, saying he had not done so because he felt “out of place and uncomfortable”.

Hamilton’s Mercedes team said in a statement they “stand with Lewis” and were “deeply saddened by the recent developments and hope to see a de-escalation soon”.

They added: “Tolerance is an elementary principle of our team and we are enriched by diversity in all its forms. We welcome and encourage people from all races, cultures, religions, philosophies and lifestyles.

“We condemn every form of discrimination as we work together to drive change forward.”

Trump Deploys Military, After Vowing To Do So