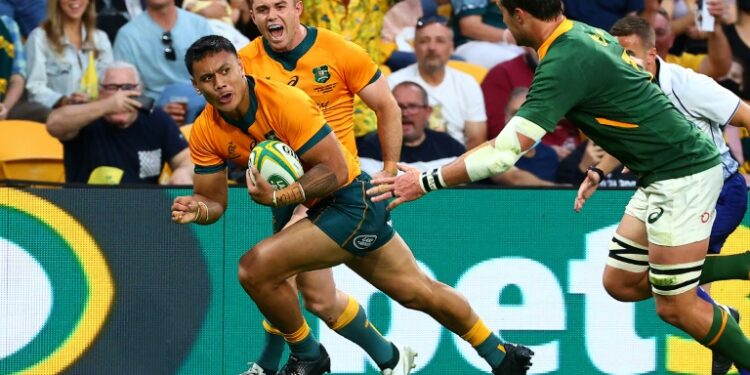 The Wallabies swept to back-to-back triumphs against the world champions South Africa with a convincing 30-17 win in Brisbane on Saturday.

The victory comes a week after the Wallabies stunned the Springboks 28-26 on the Gold Coast when Quade Cooper kicked a penalty after the full-time siren last Sunday.

But there was no need for any last-minute heroics six days later after Koroibete’s second try 10 minutes from time gave the Wallabies a crucial 13-point lead that the Springboks were never able to threaten.

“We wanted to back up last week’s performance with another strong performance and I thought we backed up well,” he said.

“We defended well – I thought we were clinical. Against New Zealand we created lots of opportunities but turned the ball over and got punished.

“Tonight, we were good enough to take those opportunities.”

His South African counterpart, Jacques Nienaber, offered no excuses and said it was the Springboks’ worst performance since against Argentina in 2018 when they lost 32-19.

“It was not a performance that was worthy enough for a Springbok jersey,” he said.

“We were truly beaten. In every department we got hands down beaten – defense, kicking game, attack.

“We just made too many errors.”

The South Africans had promised to come back strongly after last Sunday’s loss, but they were on the back foot from the beginning when talismanic scrum-half Faf de Klerk was shown a yellow card in the 12th minute for a cynical infringement in front of the posts.

Instead of opting for an easy penalty, the Wallabies kicked for the corner and the gamble paid off when Australia won quick line-out ball and outside center Ikitau broke through the tackle of Handre Pollard to crash over.

Pollard brought the score back to 5-3 with a 40-metre penalty, but Ikitau put the home side further ahead when he was on the end of some slick passing from fullback Tom Banks and winger Koroibete to dive over in the corner.

Cooper, who missed the relatively easy conversion attempt for Ikitau’s first try, converted from the sideline to make it 12-3.

Pollard and Cooper traded penalties, but the Wallabies’ discipline problems kept giving Pollard penalty chances and he closed the gap to 15-12 with two three-pointers just before the break.

To add to the Wallabies’ woes, flanker Lachie Swinton was shown a yellow card for a high tackle on South African number eight Duane Vermeulen in the closing minutes of the first half.

The Springboks took advantage of the extra man and hit the front for the first time almost from the restart when de Klerk put a perfectly weighted kick behind the Australian line for centre Lukhanyo Am, who touched down out wide.

Pollard missed the conversion, but the South Africans were in front 17-15.

Cooper put the Wallabies back in the lead 10 minutes later with his second penalty, before Koroibete steamed onto a brilliant no-look pass from Wallaby tight head prop Taniela Tupou to race 22 metres and score beside the posts.

Cooper’s conversion gave the Wallabies a 25-17 lead with 16 minutes remaining.

The Wallabies opted to keep the ball alive and were rewarded for some sparkling attacking play when Koroibete dived over in the corner following a move that started 30 metres from their own try line.

Cooper missed the conversion, but the Wallabies were ahead 30-17 at the 70-minute mark, a lead they never looked like surrendering.

China losing battle to sell its 'win-win' deals to Congolese

China losing battle to sell its ‘win-win’ deals to Congolese