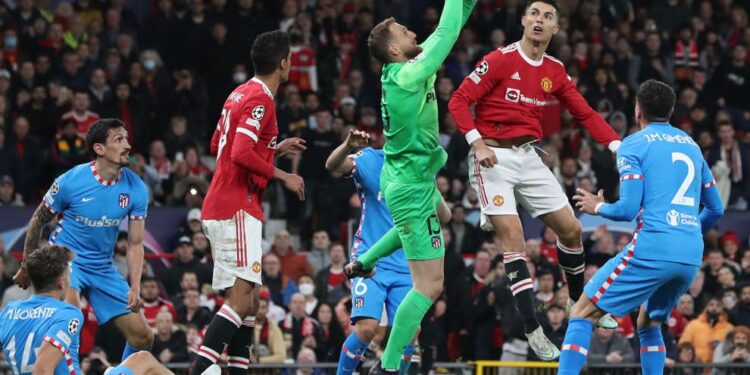 Manchester United are out of Europe after a 1-0 defeat to Atletico Madrid in the Champions League last-16 second leg on Tuesday night.

Renan Lodi’s header sent the Spanish champions into the Champions League quarter-finals with a 1-0 win at Old Trafford to progress 2-1 on aggregate.

The Brazilian full-back headed in unmarked at the back post four minutes before half-time to end United’s last chance of silverware this season as their drought without a trophy since 2017 goes on.

Ralf Rangnick’s side were not short on endeavour but lacked the guile to break down Atletico’s trademark resilience. United dominated possession for large portions of the second half but, as they have done so often, Atletico built a wall of defensive resistance – and when they did threaten, goalkeeper Jan Oblak provided the final barrier.

At the final whistle, Atletico coach Simeone showed a neat turn of pace to turn left and sprint off towards an infuriated Stretford End, straight down the tunnel without a backwards glance, pelted with objects and drinks as he disappeared from view.

United now face an uphill task just to get back into the Champions League next season as an under-performing squad filled with star names sits fifth in the Premier League.

Decolonizing Ethnic Solidarity: Why Kenyans Must Free Themselves from Traditional Authority of Tribal Kingpins