United in the Title Race after Controversial Win over City 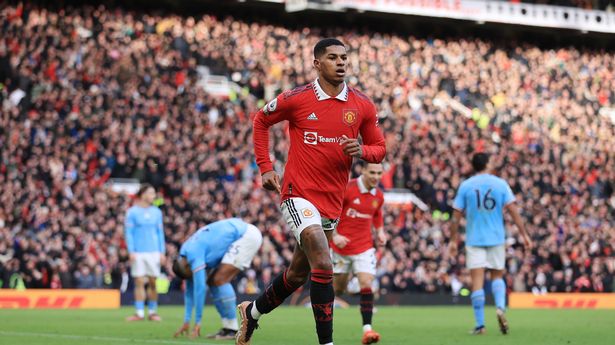 After Jack Grealish gave City the lead on 60 minutes, United rallied to score twice through Bruno Fernandes and Marcus Rashford within five minutes late to continue their impressive home run, which has seen them lose just once in front of their own fans in the Premier League this season.

“Scoring a goal and winning the game, that’s always the aim. This game is a little special,” Rashford told BT Sport.

“It’s a change of dynamics. I’ve said many times but options off the bench even when we’ve had injures, players out of position, everyone is putting a shift in.

“Anything is possible. We’re very pleased to come back and win.”

Following their Carabao Cup defeat to Southampton, it was anticipated City would be quick out of the blocks, but it was United who enjoyed the better chances in a cagey first half.

The in-form Rashford threatened throughout and nearly opened the scoring on 34 minutes.

A ball over the top of the City defence caused panic as Rashford took the ball past the onrushing Ederson, but as the England forward cut back inside to finish, Manuel Akanji stood firm to make an important block off the line.

Just four minutes later, Rashford had another great chance to break the deadlock. After being found by a Christian Eriksen pass down the left, he raced toward Ederson but a heavy touch meant the City goalkeeper could save at his feet.

The lively but so far fruitless Rashford then caused a scare as he went down injured. However, he returned to the pitch two minutes later, albeit looking laboured in his movement.

For City’s relative lack of endeavour, they improved in the second half and took the lead on 60 minutes through substitute Grealish, condemning United to their first concession of a Premier League goal at Old Trafford since September.

Grealish had only been on the pitch for three minutes, replacing Phil Foden, before he headed home Kevin De Bruyne’s pinpoint cross to score his second league goal of the season.

Casemiro’s through ball found Rashford in a clear offside position, but he let the ball run allowing Fernandes to race through and place a finish past Ederson. While the goal was initially ruled out due to Rashford’s position, the decision was overturned when it was decided he didn’t interfere with play.

Just five minutes later, Rashford finally got his goal and sent United into the lead.

“The game was really good,” City boss Pep Guardiola said. “We played good. They are incredible in transitions. Congratulations to the team. I’m proud to come here and play with this personality. They punished us in transitions.”