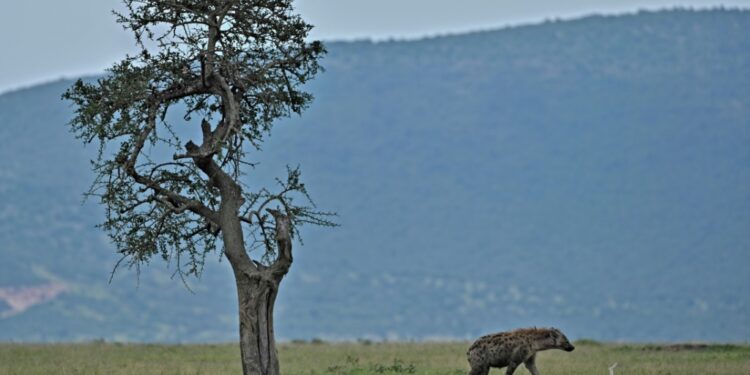 A hyena walks at the Ol Kinyei Conservancy in Maasai Mara, Kenya. Reports of wildlife straying into human habitats in Kenya have increased in recent years | AFP

A pack of hyenas killed two people over a span of 24 hours in a village just 50 kilometres (31 miles) east of Kenya’s capital Nairobi, police said Tuesday.

The hyenas, numbering about 20, mauled a man on Monday in the village of Kamuthi near the industrial town of Thika as he was returning from his job at a quarry, police said.

A second man accompanying the victim “narrowly escaped by the skin of his teeth,” police said on Twitter.

Barely 24 hours after the first attack, the hyenas struck again with residents finding a fresh human skull in one of the village farms.

“Police and Kenya Wildlife Service officers visited the scene and confirmed the incident, where a skull, scattered bones and torn bloodstained clothes were found,” the Directorate of Criminal Investigations (DCI) said, adding that hyena footprints were found at the site.

Reports of wildlife straying into human habitats in Kenya have increased in recent years as the animals come under growing pressure from cities expanding into ancient migration and hunting grounds.

A leopard wandered into a house in southeastern Kenya on December 17 after straying from its home in Tsavo National Park before rangers rescued it.

In another incident, a lion caused panic in July after straying from its habitat in Nairobi National Park into a crowded neighborhood south of the city.